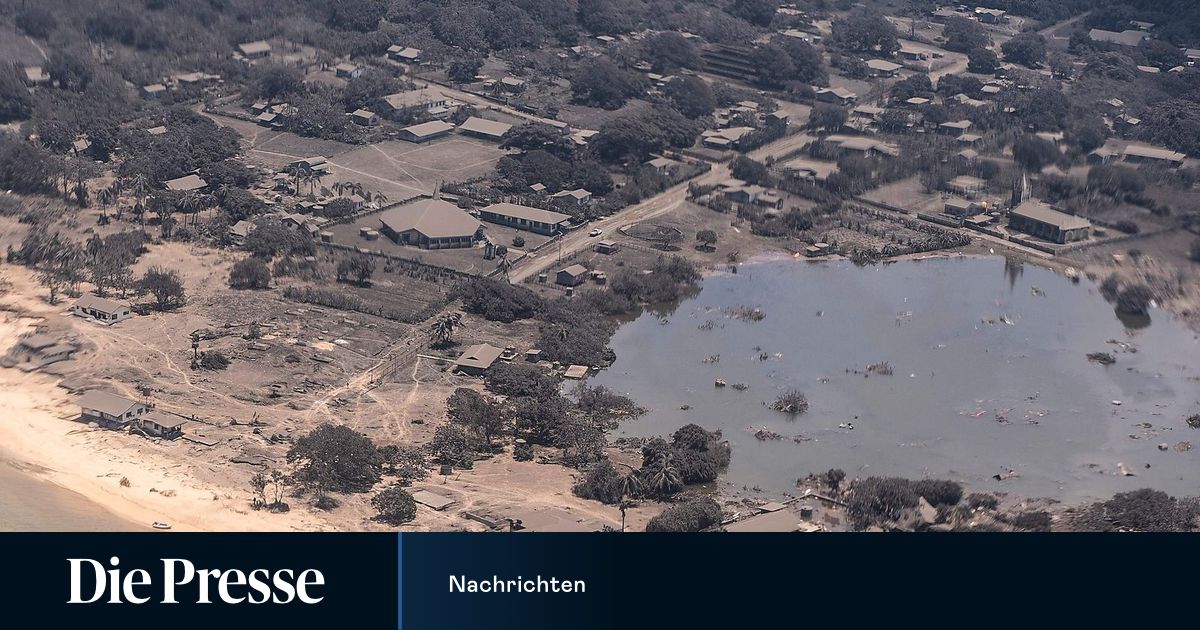 The situation is still confusing and contact with the Pacific state is severely restricted. A 50-year-old British woman was hit by a tsunami and drowned.

The situation after the outbreak of the Vulkans Hunga Tonga-Hunga Ha’apai confusing, the extent of the damage cannot be estimated. The Pacific country of Tonga is still almost completely cut off from the outside world. Phone lines are down because an undersea internet cable was damaged in the volcanic eruption. The connection via satellite phones is also not reliable. Australia and New Zealand sent the first reconnaissance planes on Monday. The first death has been confirmed.

It is a 50-year-old British woman who lived with her husband in Tonga’s capital, Nuku’alofa. She was caught by a wave and died. Her brother reported this to the British media on Monday. Previously, only the death of two women in Peru, more than 10,000 kilometers away, was known, who drowned in unusually high waves.

location is being evaluated

Two days after a massive eruption of the volcano, military aircraft from New Zealand and Australia have reconnoitered the situation from the air. The extent of the damage in the South Seas archipelago is still unclear. Communications there continued to be severely impacted on Monday, particularly on more remote islands that have not been contacted since the Hunga-Tonga-Hunga-Ha’apai erupted.

The government there is sending out ships to explore the situation, Radio New Zealand reported on Monday. Tonga consists of around 170 islands. Saturday’s eruption could be heard thousands of miles away. A huge cloud of ash had risen for kilometers like a mushroom cloud. The eruption triggered tidal waves and put many Pacific countries on alert.

Tsunami waves were recorded not only in Tonga, but also in New Zealand, Japan, Alaska and South America. Aid organizations warned of health damage from the ash and advised Tonga residents to wear masks and only drink bottled water. Floods were also reported from Peru, among others, but the situation there normalized again on Sunday (local time), according to media reports. In the meantime, there was a tsunami warning for Easter Island and the coastal region in Chile, which was then lifted again.

According to experts, the outbreak was the strongest in the world for 30 years. Initial data showed there hadn’t been such a violent eruption since Pinatubo in the Philippines in 1991, said volcanologist Shane Cronin of the University of Auckland Radio New Zealand. If the eruption had occurred on land, the effects would have been “apocalyptic,” Cronin said. It is unclear whether the recent eruption represents the peak of activity. It could also be that the volcano remains restless for several weeks or even years.

The ash plumes triggered by the eruption have now even reached Australia’s east coast, the Weather Watch New Zealand weather service said. The cloud is moving west across Queensland and will cover much of the state during the day, it said.

According to Prime Minister Jacinda Ardern, New Zealand now wants to send a second Hercules machine with important relief supplies to Tonga. If the runway in Tonga’s capital, Nuku’alofa, is damaged, the materials could also be jettisoned, Ardern told reporters on Monday. “Flights operated today will help us determine where the need is,” Ardern said. “We know there is an urgent need for water and we hope that Hercules can launch today to meet that need.”

As a result of the seaquake, an important undersea cable was also cut, so the Internet in Tonga was down. The other communication links were also disrupted, but mobile phones seemed to be working at least partially, albeit only locally and not internationally. “It is a terrible time but Nuku’alofa is still standing, electricity has been restored to many homes,” New Zealand’s High Commissioner in Tonga, Peter Lund, said on Facebook. The capital lies under a layer of volcanic ash. Cleanups should begin this week.

in macronie, we knew, nobody did anything – Liberation