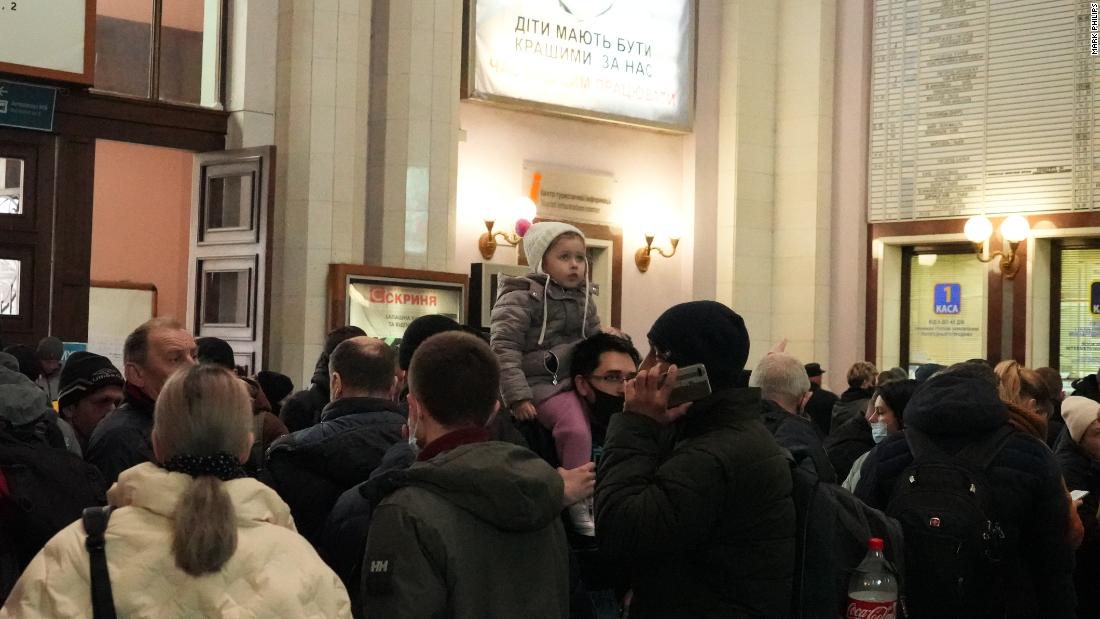 They shoot in the air to control the crowd fleeing from Kyiv 0:52

Lviv, Ucrania (CNN) — At the Lviv railway station, in the westernmost corner of Ukrainenear the Polish border, hundreds of people exit trains and disembark as sirens wail.

The terminal, one of the most historic Art Nouveau structures in Europe, is now a landmark for those displaced by the war, who try to put hundreds of kilometers between themselves and the invading Russia, as they approach the front line of the NATO.

That the historic cultural center could become a target for Moscow was unthinkable to many, including diplomats and international organizations who have fled the Ukrainian capital Kyiv for Lviv in recent weeks.

But when the sirens sounded, it was a chilling reminder that no place in Ukraine is safe from Moscow’s attack on the country.

There was a distant look on people’s faces. Most moved listlessly in the courtyard outside the station, even when the sirens sounded.

Families gathering their belongings outside the station.

A family piled blankets over their baby in a stroller. Two women dressed a shaky French bulldog in a knitted pink sweater. Several other families sat together surrounded by large suitcases and plastic bags. They said they had not slept for days due to the shelling that has hit the regions they left.

They had traveled to Lviv from cities and towns across the country, quickly packing backpacks and gathering a few belongings before fleeing their homes.

Still reeling from the violence, many say they don’t know where to go next. It is a question that has been complicated by a new Ukrainian martial law that has been implemented. Among other restrictions, it prohibits men between the ages of 18 and 60 from leaving the country.

Families considering crossing the border from Ukraine must deal not only with the trauma of becoming refugees, but also with the possibility of being separated from their children, siblings, husbands and partners.

Artem Zonenko has just arrived in Lviv from Kyiv together with his mother-in-law and little daughter. They spent the night before sleeping on the floor of a subway station sheltering from the bombardment of the Ukrainian capital. His wife had been in Lviv for a few days. The family plans to spend a day together before deciding whether the grandmother, mother and child continue to Poland, leaving Zonenko behind.

When asked how he felt about it, he smiled despairingly. “I’m not sure what to tell you. It is what it is,” she said, herding his family into a cab.

UNHCR said that at least 100,000 people fled their homes in the first 24 hours of Thursday’s military attack. State media and an eyewitness said more than 7,000 cars were queuing at border crossings with Poland, with a line stretching for more than 30 kilometers.

Andrei, 45, looked into the distance as he took a long drag on his cigarette. He had just arrived from his native Odessa in the southeast and was hatching a plan to meet his Belarusian wife in Poland. “She’s pregnant. I need to go with her,” he said, refusing to reveal her full name for security reasons. “This law makes no sense.”

Crowds of displaced people disembark at the Lviv station.

The government announced the general mobilization order, which included a travel ban for the men, while he was on the train. It’s a curveball that could change the future of his family, he said. “And later [nos] we got off the train and the sirens went off,” he said. “I was surprised, because they didn’t even tell us where to shelter. I was surprised because this place is supposed to be safe.”

“And now they tell us that we can’t even leave the country, while the migrants can,” he pointed out to a group of foreigners who were nearby. “I ask you, is this fair?”

For immigrants arriving in Lviv, their destination is certain: Poland or any neighboring state that welcomes them.

“I don’t know where to shelter because nowhere is safe,” says Mehmet, a Turk living in Ukraine, dragging two large suitcases across the pavement as sirens wail. “We’re just going to leave the country.”

People search through their belongings and plan where to go.

A group of Algerian university students from Odessa were frantically discussing their plans. “We will just go to Poland,” said Takieddine, who asked not to be identified for security reasons. “There is no way for us to stay in Ukraine.”

“We never thought this would happen in Europe. Never ever. Not in a million years.”

Ihor Nakonechyi, 52, is in the border town of Mostyska making arrangements to transport his ex-wife and daughter to Poland. He plans to drop them off at the nearby crossing and then return, not only because he is prohibited by law from leaving the country, he says, but because he “can’t wait to pick up a gun” and join the fight against the Russians.

“It’s hard… but the law doesn’t bother me. In fact, I think this is the right thing to do.”

Venezuela reiterates rejection of sanctions and attacks against Russia