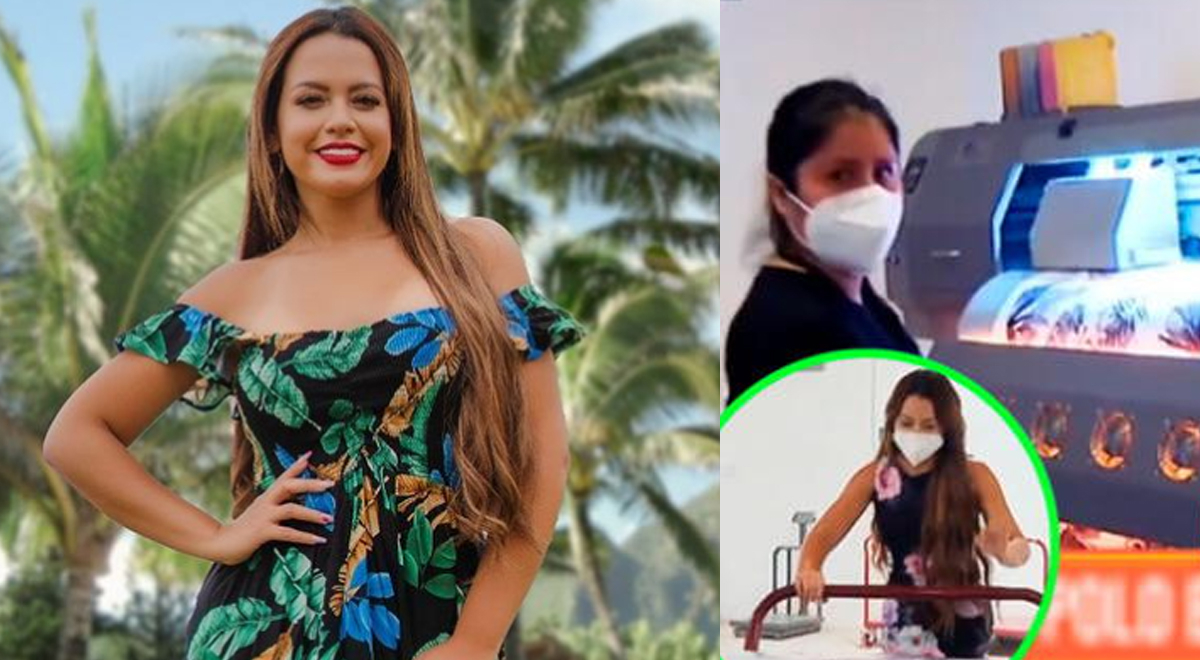 All a success! In a note from women in charge, Florcita Polo not only gave details of her private life in relation to Néstor Villanueva, but also took the opportunity to show a little more of his clothing store Queen Bee, entrepreneurship that has grown quite a bit during the pandemic since now it even has 11 stores.

YOU CAN SEE: Néstor Villanueva would seek to return with Flor Polo: “When there is love it can be solved” [VIDEO]

“This is my workshop,” Florcita said as she walked through the place where her dresses are made, previously designed on a computer, printed, and then passed through the sublimation process.

Thus, the still wife of Néstor Villanueva commented that now she is only working “hard and evenly together with her women entrepreneurs” in reference to the collaborators who work with her.

“We have 11 stores in Lima and the province, it was a great challenge, we have fought from below to continue growing,” he added to finish.

YOU CAN SEE: Néstor Villanueva mocks Susy Díaz after separation from Florcita: “Let me get a diet”

Néstor Villanueva on Florcita: “We give all our love, and suddenly the couple wants more”

Néstor Villanueva has been on everyone’s lips since his separation from Florcita Polo was officially announced, and despite the fact that he denies that this fact is definitive, he continues to give details of what happened with his still wife. Everything was recently exposed thanks to his spicy statements.

“We think we give all our affection, love and appreciation, and suddenly the couple wants more. I really don’t understand, today they announce your crisis on TV, and I really hope to talk to find out what happened,” he said.

Néstor Villanueva confused: “I’m surprised that Flor makes a statement without telling me”

A Nestor Villanueva It is difficult for him to talk about the statement sent by his wife Florcita Polo Díaz in the media, in which he confirmed his definitive separation from the father of his children. The now ranchera singer was moved when referring to said document and was surprised that she did not notify him before posting it on her social networks.

“First of all, I feel that statement is not from her. One because it is not his letter, in fact, I am surprised that he releases a statement without having talked to me, “he expressed a little nervously to the cameras of” On everyone’s lips “.

Tula Rodríguez to Florcita Polo for problems with Néstor Villanueva: “We all go through a crisis”

In On everyone’s lips, a few weeks before, little flower pole was presented by tula rodriguez, who at once came out to refer to the subject of Nestor Villanueva, Y he did not expect the message that it would give him.

“There is talk of a distance, of a marital crisis. (…) The important thing is that you are calm, for the mental health of your children too, and take care of the heart. Let’s try to smile a little, we all go through crises, “he said.

Susy Díaz spent Christmas with Florcita without Néstor and trolled him: “I take advantage of the ampay!”

A few weeks ago, Susan Diaz confirmed that spent Christmas with his daughter and his grandson Estéfano, without the presence of the cumbiambero, who was in his land with the oldest of his little ones, Adriano, and then told an unexpected anecdote.

“Yesterday Adriano called his mother by video call to greet her for Christmas and passed the phone to Néstor’s sister and her mother, and I shouted: Take advantage of the ampay!, and they cut the call, “he said.

Néstor Villanueva would seek to return with Flor Polo: “When there is love it can be solved”

Will he win her back? the cumbiambero Nestor Villanueva He arrived this Friday, January 21, on the set of En boca de todos to tell his truth after his still wife Florcita Polo confirmed through a press release that her marriage to the father of her children has come to an end.

However, at the end of his interview in On everyone’s lips, Nestor Villanueva He was surprised to ensure that he still loved the mother of his children Florcita Polo. “I have tried to leave pride at 100%, when there is love it can be solved… there are children involved,” he said.