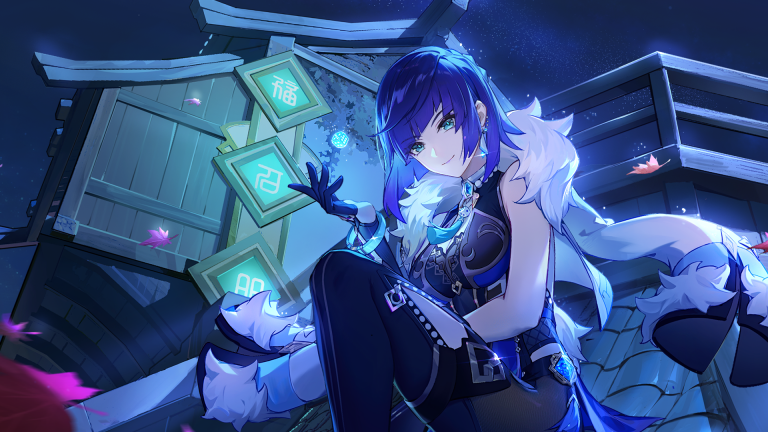 ◇ A mysterious person who claims to work for the Civil Affairs Bureau. However, it does not appear anywhere in their registry.

◇ The color of this longbow is unpredictable. Under the light, it takes on a lustrous, watery blue.

◇ A precious platinum bow, encrusted with an orb that shimmers in the evening light.

During the event, travel to the Chasm and investigate the mysteries of its depths, then complete the various challenges to get primo gems, Crown of Wisdom, weapon upgrade materials, skill enhancement, mystical enhancement ore, hero’s lessons, moras, and other rewards. Complete designated challenges of “Realm of Tactics” to obtain the event-exclusive weapon “Sunset Twilight (Bow)” and its refinement materials.

– Lv. of adventure greater than or equal to 28

– Complete the Archons Quest “An Approaching Star” and World Quest “Where Does the Spirit Stone Come From?” »

– Complete Arataki Itto Story Quest “Taurus Iracundus – Act 1”, Shogun Raiden Story Quest “Imperatrix Umbrosa – Act 2” and World Quest “The Teapot of Your Dreams – 1” for make the most of this event.

During the event, if you haven’t completed the story quests of Arataki Itto, Shogun Raiden and the world quest “The teapot of your dreams – 1”, you can participate in the event by clicking on the “Quick Start” button.

“On Stage and Off”, “Spring Breeze Under a Fan”;

2. Updated some achievements in “Wonders of the World” and “Memories of the Heart”;

8. Added character upgrade guide functionality: Recommendations on improving skills and choosing the main attributes of artifacts are now available on the corresponding interfaces;

11th floor energy anomalies have been fixed as follows:

DMG inflicted by characters equipped with a greatsword is increased by 75%.

Updated monsters on floors 11 and 12.

The three phases of Blessing of the Abyssal Moon will be as follows as of their first update in 2.7:

Normal attack DMG increases by 16% for 8s when the deployed character uses an elemental skill. This effect can be stacked up to 3 times, the duration of each stack being calculated independently.

An enemy’s physical RES and elemental RES are reduced by 12% for 8s when a character hits them with an elemental skill. This effect can be stacked up to 3 times, the duration of each stack being calculated independently.

If the deployed character is using an elemental skill, their next normal attack, if it hits an enemy, releases a shockwave at the enemy’s location, inflicting DMG. This effect can be triggered once every 1.2s.

1. Reduced the difficulty of the daily mission “Wild Thunder” on Narukami Island: replaced some enemies.

2. Reduced the difficulty of the daily mission “For Executioners!” » on Narukami Island: decrease in the overall strength of the enemy formation.

3. Reduced the difficulty of the daily mission “Race against time” on Yashiori Island: extended the duration of the challenge, replaced some enemies, eliminated barriers on the road.

4. Reduced the difficulty of the daily mission “Crackling Crisis” on Yashiori Island: decreased the overall strength of the enemy formation, extended the duration of the challenge.

5. Reduced the difficulty of the daily mission “Worthy of the name strikes in broad daylight!” on Yashiori Island and Seirai Island: Extended the amount of time patrolling enemies remain at the breakpoint.

6. Reduced the difficulty of the daily mission “A Cargo at Risk” on Narukami Island, Yashiori Island and Seirai Island: reduced the speed of the Blob ball, reduced the number of enemies on the path of the ball.

1. Optimized weekly Battle Pass quests. If these quests are completed during the current week, their progress and data will be saved after the version update, and will not be reset during the week it takes place;

2. Exploration rewards from Dihua Swamp in Liyue are changed to “Ponytail” and “Loupe-de-loup” and from Guili Plains to “Mora”; After the update, you will receive Mora ×5000, Lotus Fruit ×12, and Matsutake ×12 as compensation;

3. Optimized the order in which characters appear in the interface. For the same level, characters that have not been raised will appear in succession;

4. Optimized notification display effects. When the content of a message appears on the screen, the list of information on the left (quests, challenges) appears semi-transparent;

5. Optimized the interface that shows how to get a gadget in the inventory. When the origin of the gadget is not yet unlocked, the text appears in white on a dark background;

6. Optimized the experience of using the gamepad in the settings: when you do not switch between options in the left tab and return to the options on the right, the system will resume automatically the last option selected;

7. Optimized the list of character ability effect descriptions in cooking, synthesis, blacksmithing, expedition and decoration placement interfaces: the height of the list can be adjusted;

8. Optimized the warning effect on the Oculus detector map: added movement effect to the detection circle;

1. Optimized the animation of some characters when thrown in the air.

1. Optimized the sound effects of some items.

2. Adjusted Japanese voiceovers of some story quests and bosses.

3. Optimized and adjusted some Korean character and NPC speech lines.

2. When obtaining the characters Jean, Amber, Rosalia and Mona, their alternate outfits are displayed automatically;

3. During the “Trying on is Adopting” event, the appearance of the characters Jean, Amber, Rosalia and Mona has been adjusted to show their alternate outfits;

4. The bitrate of cutscenes from earlier versions on mobile has been fixed at 2500 kbps to optimize the size of the client.

5. Chroma support on Razer devices is temporarily suspended due to an in-game crashing issue. This feature will be restored as soon as the issue is resolved.

Because of inflation – food prices are rising even more! – Business