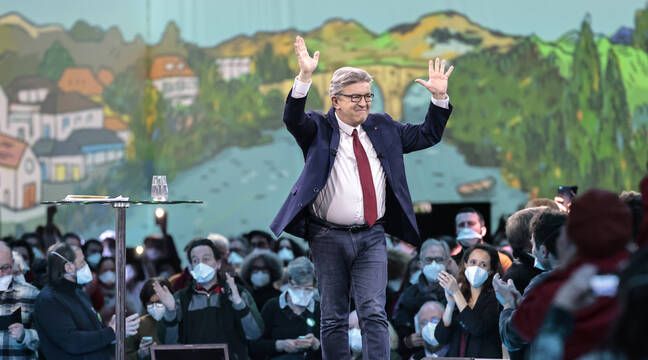 “It was huge! He dazzled us,” enthuses a young activist. Five years after having innovated with his famous holograms, Jean-Luc Mélenchon has gone up a notch in the use of new technologies on the occasion of his first meeting in 2022 this
Sunday afternoon in Nantes. In an Exhibition Center without a restrictive gauge, nearly 5,000 activists equipped with a compulsory FFP2 mask attended an “immersive and olfactory meeting” arousing great curiosity.

Arrived like a rock star on an electro rhythm, the tribune of insubordinate France (LFI), presidential candidate, spoke for more than an hour from a central stage, in the heart of a crowd itself surrounded four walls of giant screens of 50 m each. “It had to be a bang and we are doing it! We had to stage the vision of the world towards which we want to move in a big way”, rejoiced Jean-Luc Mélenchon.

Space, digital and the sea as common thread

The 360° experience began with the projection of dynamic images of the solar system. “It is seen from space that we better understand what there is to do on Earth”, justified the speaker, promising “spatial” and “nuclear” disarmament. It continued with the dissemination of algorithms and digital forms, pretexts to demand “national control of Internet cables and servers” and “not to be afraid of artificial intelligence” if it can “allow the reduction of job “. Then by a movement of maritime waves (with noise) to defend renewable energies and denounce, among other things, “the cemetery of the Mediterranean Sea”. “Look at the power of the sea! It contains 66 times the energy needed on Earth. »

At the rate we are going, there will be more plastic in the Mediterranean than fish by 2050.

We have nothing to do with this rampage. Why should so many people pay the price? Justice for all of us: a practical and uncompromising ecology. #MelenchonNantes pic.twitter.com/7r4Ls4yuP5

Announced as a world first in a political context, the diffusion of scents in the room was much less convincing. Admittedly, a few perfume notes seemed to accompany the visual paintings. But, with an FFP2 mask on the nose, they were difficult to feel and, even more, to identify (orange? jasmine? oak moss?). The link with the themes mentioned was therefore far from obvious.

“We are pumped up. I feel like it will.”

It took four days of editing to develop these unique sets imagined by the scenographer David Mathias and co-designed with the company Videlio. “This makes it possible to create universes in order to give substance to more abstract concepts”, explains MP Bastien Lachaud. The goal was also to “prove that technology can connect people”.

“Honestly, it was great. Surely the most beautiful meeting in which I participated”, gets carried away Nicole, 62 years old, at the exit. “It was crazy, I got goosebumps,” adds Glen, 29. “We are pumped up. I feel like it will. It will be in the second round”, predicts Nicolas, however pointing the finger at “some gadget effects which do not necessarily look like us”.

“I’m not their boyfriend. Let it be said »

On the merits, Jean-Luc Mélenchon also promised this Sunday afternoon “the increase in the minimum wage to 1,400 euros net”, the “retirement at age 60 and 40 annuities”, the supervision of “prices of first-class products necessity”, the “limitation of bank charges”, the recruitment of teachers and nursing staff, the end of intensive farming, or even the “abolition of the Ministry of Agriculture” to replace it with a “Ministry of Food Production “. The LFI candidate also buried the hypothesis of a union with Anne Hidalgo or Christiane Taubira in the first round. “We are not concerned with the misadventures of the center left. I am not their boyfriend. Let it be said once and for all. »

At the conclusion of the meeting, Jean-Luc Mélenchon confirmed this Sunday the organization of a “big march for the sixth Republic” on March 20 in Paris. And the return of holograms in its meetings from April.

COVID-19 Vaccine reluctance – Macky has its dose: Senegal has a stock of 5 million overdue doses – Lequotidien

Brazilian collection of GDR painters in the Cottbus State Museum