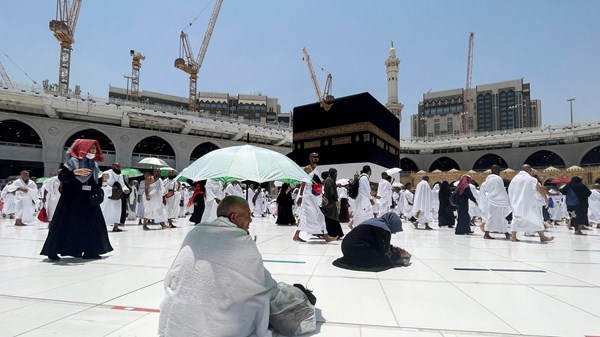 Thousands of pilgrims have begun heading to the holy city of Mecca, among the nearly one million people expected to perform Hajj this year, two years after the Covid-19 pandemic.
Thousands performed circumambulation around the Kaaba, wearing Ihram clothes.
“Praise be to God… it is impossible to describe my feelings now… my presence in the Haram and in the land of the Two Holy Mosques makes me very happy,” said Ahmed El-Sayed Mahmoud, an Egyptian pilgrim.
This year, Saudi Arabia allowed pilgrims to enter from outside it. Only a few thousand Saudis and residents attended the Hajj in the past two years due to the COVID-19 pandemic that has swept the world.
Saudi Arabia said that one million people can perform Hajj this year due to the continuation of precautionary measures, which is less than half the numbers before the pandemic. Hajj this year is limited to pilgrims between the ages of 18 and 65 years, who have received all doses of vaccines to prevent Covid-19 and do not suffer from chronic diseases.
Over the years, Saudi Arabia has spent billions of dollars securing one of the largest gatherings in the world.