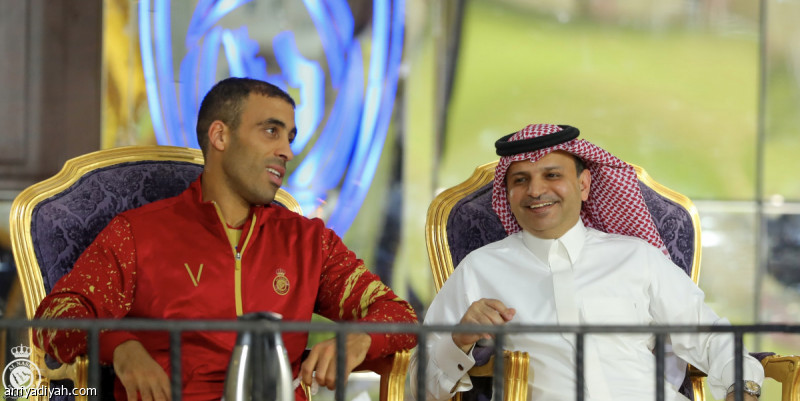 Moroccan Abdel Rahim, brother of Abdel Razzaq Hamdallah, player of the first football team, was surprised, on Wednesday, by granting Al-Nasr a certificate of financial efficiency, without handing over his brother’s late salaries, according to what he mentioned through a post broadcast on his personal account on “Instagram”, the social networking site.
The Al-Asimi club announced earlier, on Wednesday, that it had obtained a certificate of financial efficiency, after fulfilling all its contractual and financial obligations, according to the scope specified by the committee until the date of last September 30, in accordance with the provisions of the Financial Efficiency Regulations for Sports Clubs.
Abdel Rahim Hamdallah, brother of the current Al-Ittihad player and former victory, published a picture of Al-Nasr’s financial efficiency certificate and commented on it: “I am surprised that Al-Nasr Club was granted a certificate of financial efficiency, while my brother’s late salaries remain.”
The management of Al-Nasr Club announced the termination of the contractual relationship with Hamdallah on the 23rd of last November, noting that the termination of the player’s contract came due to a legitimate legal reason and according to the regulations of the International Football Association “FIFA”, stressing that it reserves all the financial and legal rights resulting from this before the judicial authorities. competent.
For his part, Ahmed Al-Ghamdi, CEO of Al-Nasr Club, confirmed his club’s fulfillment of the requirements for financial efficiency, and without a tweet on his personal account on “Twitter”, the social networking site, in which he stated: “Thanks to God and then the support of the symbol, we have fulfilled all the requirements for financial efficiency, as all players currently present and leaving received their salaries. Until 9-30-2021, without any scheduling or settlement.. Thanks to all colleagues who worked on this.”

Two-thirds of Omicron patients were previously infected with corona.. a shocking study