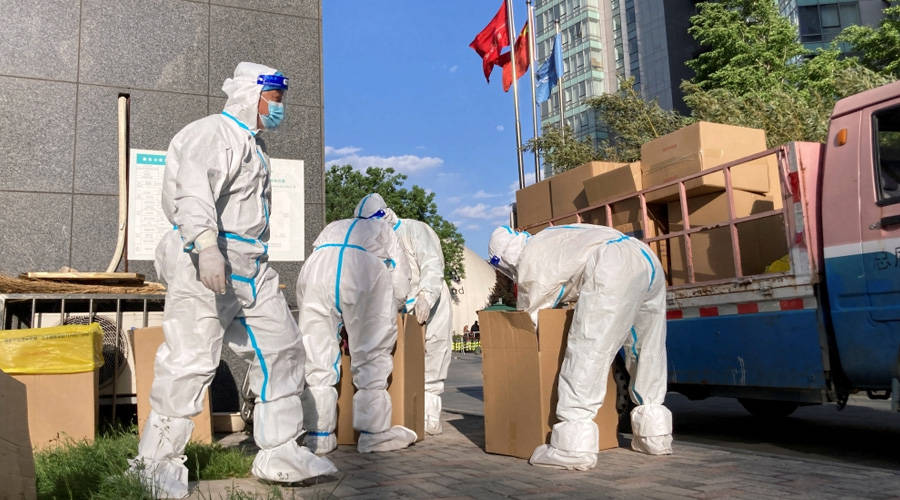 Shanghai – AFP
Disinfection services in China are spraying tons of chemicals, from streets to apartments to pets, in their quest to eradicate the Corona virus, although the effectiveness of this measure to combat the epidemic is questioned.
China, where COVID-19 first appeared at the end of 2019, saw a resurgence of the epidemic at the beginning of the year with the mutated Omicron causing the closure of entire cities, especially the most populous Shanghai.
The sterilization campaign, which is part of the “zero covid” strategy, is a “systemic attack” against the virus, according to a local official in early May.
Videos circulating online showed employees in full protection kits spraying apartments whose residents were transferred to the quarantine center.
No personal belongings, such as furniture, clothes, and food, escaped the spray of disinfectant in the homes whose residents had to leave for this purpose.
Outside, the wave of sterilization has reached sidewalks, building walls and even gardens.
Experts believe that these efforts are not useful in the face of a virus that spreads mainly through the air when coughing or sneezing.
not useful
But this is not enough to dissuade employees in protective suits from doing their job.
Shanghai, which has been under lockdown since early April, had disinfected at least 13,000 apartment complexes by May 2, or 140 million square metres, according to Vice Mayor Liu Duo.
The government’s “zero Covid” strategy, despite its cost to the economy and public liberties, is causing increasing resentment from Shanghai residents, who complain that it will continue for an unknown extent.
China has recorded limited deaths so far as a result of Covid, unlike those recorded in Western countries. The Chinese government sees this as evidence of the “superiority of its policy”.