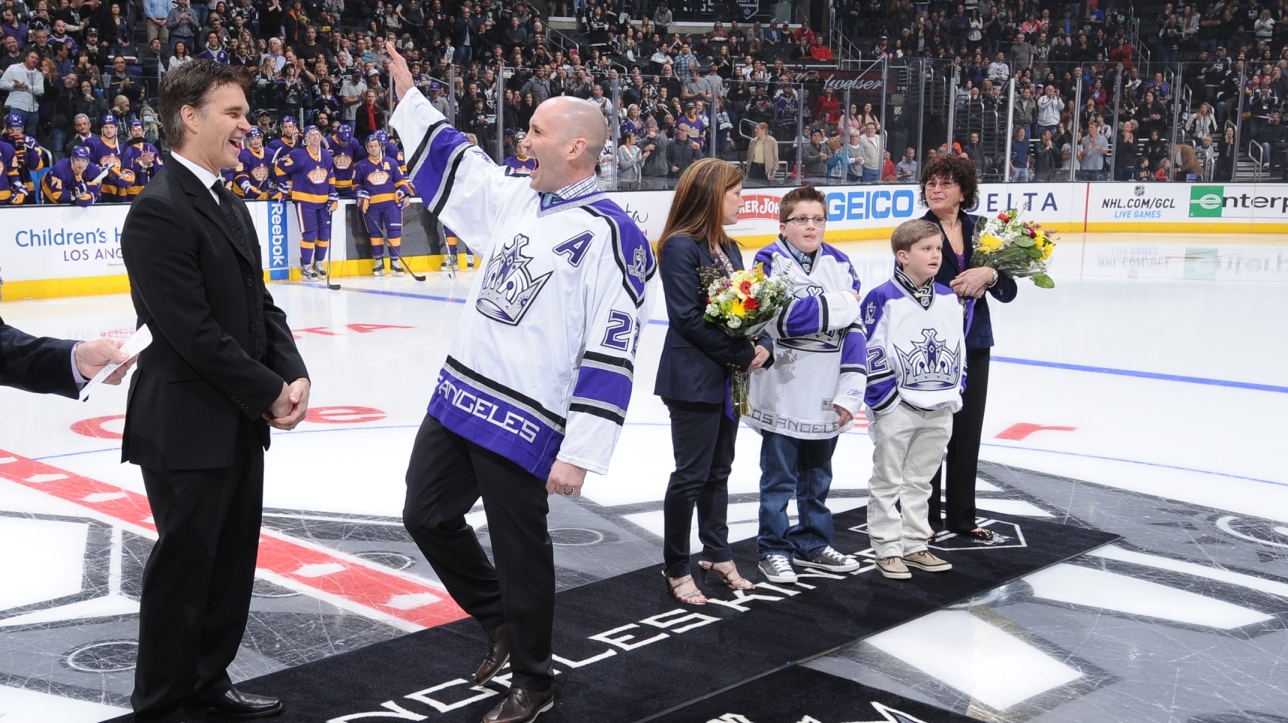 Here is the 1st article of a series of 5 on the theme of teammates. Each article allows, with a different angle, to expose the strong bonds which unite teammates in the sport.

MONTREAL – No matter the level reached, we all had a favorite teammate. A teammate who deserved to be paid a little tribute. For Ian Laperrière, himself recognized for having been an exemplary teammate, this inspiring and outstanding partner was Luc Robitaille.

In his second full season in the NHL, Laperrière was traded from the St. Louis Blues to the New York Rangers. On the bench, the 22-year-old forward looked around and saw that he was surrounded by Robitaille, Mark Messier, Adam Graves, Pat Verbeek, Alex Kovalev, Ray Ferraro and company.

Already that was very impressive, let’s say that it was not the most favorable context for the prospects of his career. But, in just a few months, he forged a very strong bond with Robitaille, who was his roommate with the Rangers.

Laperrière found an attentive ear, and especially valuable advice, with Robitaille and his help was particularly valuable when he was traded, again, to the Los Angeles Kings.

“We all know that Luc is a darling over there, I should even say a legend! He told me ‘I know you, be yourself and the Kings fans will love you. I took his advice and he was right. I was there for nine years and then I had good years,” he recalled.

Laperrière has become, in turn, a favorite of this Californian crowd and he hastens to say, laughing, that it was not for the same reasons. In this more robust era, one could simply say that it wasn’t the same column of stats he blithely stuffed.

As a rookie with the Blues, Lappy hadn’t discovered so many chemistry with a teammate. He expected it to click naturally with Robitaille because of their Quebec affinities, but he admits that he doubted it a bit.

“I am younger than him (they are eight years apart). I watched him on TV, he was funny and friendly. I wondered ‘Is this the real Luc?’ A lot of people do that on TV, but when you meet them in person, you’re really disappointed. But him, from my first practice with the Rangers, he was exactly the same and he never changed, “said the man who now acts against the head coach of the Flyers school club.

“When you’re with Luc, you feel good, he makes you feel comfortable. Whether you’re a 6-year-old or a 60-year-old, he has plenty of time for others. I was a 22-year-old, he didn’t have to give me time, but he did,” he added.

This remark by Laperrière opens the door to a subject that was essential. Even as a journalist, when you rub shoulders with him, you feel that you can have fun while working.

“It’s funny you say that, it’s the biggest lesson I learned from him. It’s a sport, but it’s a business in the end and billions are involved. But he always had a big smile and it’s something that’s contagious that I stole from him,” admitted the former right-handed striker.

On a lighter note, the ace scorer had given him another piece of advice to remember.

“Never be cheap with the room service employees, it’ll pay off for you eventually. A lot of my buddies say I’m cheapbut not that much, ”laughed Laperrière.

Robitaille left out, the roles are reversed

“He didn’t do this for me. He loves me a lot, but it wasn’t for that reason, he noted with a laugh. Like the (Martin) Brodeur and (Claude) Giroux, it’s weird to see them in a different jersey. It was just normal for him to end his career here. »

During this last stretch of his career, coach Andy Murray had forced him into a spectator role a few times.

“He had a little bit tougher times, things weren’t going so well with Murray and it really hit his ego. But he had no negative influence on anyone, he solved his problems himself, ”said Laperrière.

At this moment, it gives the impression that the roles have been reversed.

“That would be up to him to answer, but I was there for Luc and I wasn’t the only one, he is so appreciated. We all felt bad for him. I remember we were in a hotel lobby in Columbus and I sat down with him just to listen. There are worse things in the world, but for a hockey player, your ego takes a hit and you need to talk about it. I think he appreciated it, we are still great buddies today,” commented Laperrière.

On the ice, Lappy didn’t have to defend the former offensive terror of the Hull Olympiques.

“He wasn’t a hateful guy, but the players were rough with him because he was one of the best players. I don’t remember having to fight for him, it probably happened once or twice, but he was so nice that the world didn’t want to pick on him I guess, “said Laperrière .

Off the ice, our imaginations lead us to believe that the two buddies must have had quite a bit of fun in the hectic city of Los Angeles.

“We are rather the same, we are nerds hockey. It’s funny, people often tell me ‘You played in LA for 9 years, that must have been cool!’ But I don’t really have the personality to go to Hollywood and bars, then Luc is the same. I know it sounds sexy to say that you played in LA with the stars and all that, but we had very quiet little lives, ”assured Laperrière.

Lappy loves the man before the player

Since Laperrière has his heart in the right place, he reproduced Robitaille’s human approach with the youngest.

“The way Luc welcomed me and took care of me, I certainly tried to do that in my turn with those who arrived. Guillaume Latendresse told me that Éric Bélanger had helped him when I had taken care of Éric, he had lived with me. It’s fun when you can see guys taking a little inspiration from what they liked about you. It started with Luc and it snowballed. […] He was really a big brother in the background, ”expressed Laperrière.

Even today, Laperrière seeks advice from Robitaille for both hockey and life in general.

“In 17 years, I played with a lot of teammates, but there is only a small group of players with whom you stay in contact for the rest of your life and Luc is one of them,” identified Laperrière.

Sometimes, for different reasons, we do not express our love to those who are essential in our life. But Laperrière has this refreshing sincerity.

“He knows how much I appreciate him. Yes, everyone loves the hockey player, it’s amazing what he’s accomplished, but he’s the man I appreciate. He is humble in all his success. When I won the Bill Masterton trophy (in 2011), he gave it to me. It was the icing on the cake and I said on the microphone that I had learned a lot from him,” mentioned Laperrière, who is not the only one to have expressed his gratitude to him.

“At the Staples Center, there is a big statue of Luke! He and Wayne Gretzky made hockey popular and people are grateful. They appreciate it since the statue is bigger than that of Wayne, Shaquille O’Neal and the others, ”concluded Laperrière.