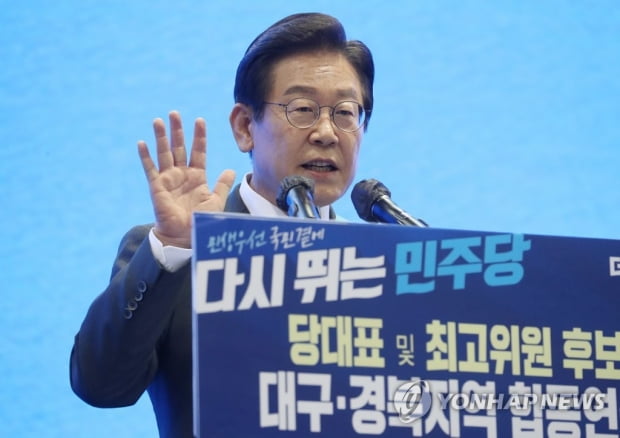 Candidate Jae-myung Lee of the Democratic Party of Korea also took first place with more than 70% of the votes in the Jeju-Incheon primary held on the 7th.

With a cumulative vote rate of 74.15% for two days, a ‘solo rule’ was established from the beginning.

The Democratic Party held a joint speech session for candidates in Jeju and Incheon on the second day of the national tour on the 7th and announced the results of voting by the right party members in the region.

In Incheon, where Candidate Lee’s constituency is located (Gyeyang-eul), Candidate Lee took first place with 75.40%, while Candidate Park received 20.70% and Kang received 3.90% of the votes.

Candidate Lee received 74.81% of the support in the Gangwon, Daegu, and Gyeongbuk primary elections the day before, and maintained the overwhelming first place for the second day, recording a cumulative vote rate of 74.15%. % and so on.

The results of the ballot count announced by the Democratic Party at the site of the circuit are the results of voting by the right party members in the area.

The Democratic Party reflects 30% of delegates, 40% of members of the Rights Party, 5% of general party member opinion polls, and 25% of general public opinion polls, respectively, in the party representative primary election. It will be announced at the National Delegation Conference on the 28th.

The results of the public opinion poll will be announced in two installments on the 14th and 28th.

After the announcement of the results, Candidate Lee said, “I am only grateful for the support of more people than I expected.

I will do my best until the last minute.”

Candidate Park said, “The public opinion poll will be announced next week.

On the other hand, in the case of the top member voting, candidate Chung Cheong-rae took first place with 28.40 percent of the votes for two days.

Candidate Ko Min-jung is in second place with 22.24% of the votes so far.

The top five members will be elected.

Among the candidates who have been included in the top five so far, many candidates including Chung Cheong-rae, Park Chan-dae, Jang Gyeong-tae, and Seo Young-gyo are classified as favorable to Lee Jae-myung.

Starting with Gangwon, Daegu, and Gyeongbuk the day before, the Democratic Party toured Jeju and Incheon on the day, Busan, Ulsan and Gyeongnam on the 13th, Sejung, Chungcheong, and Daejeon on the 14th, Jeonbuk on the 20th, Gwangju and Jeonnam on the 21st, and Seoul and Gyeonggi on the 27th. continue the contest.

On the 28th, a national delegates convention will be held to determine the final elected leaders, including the party representative.

Why does the coolant boil in the car tank?