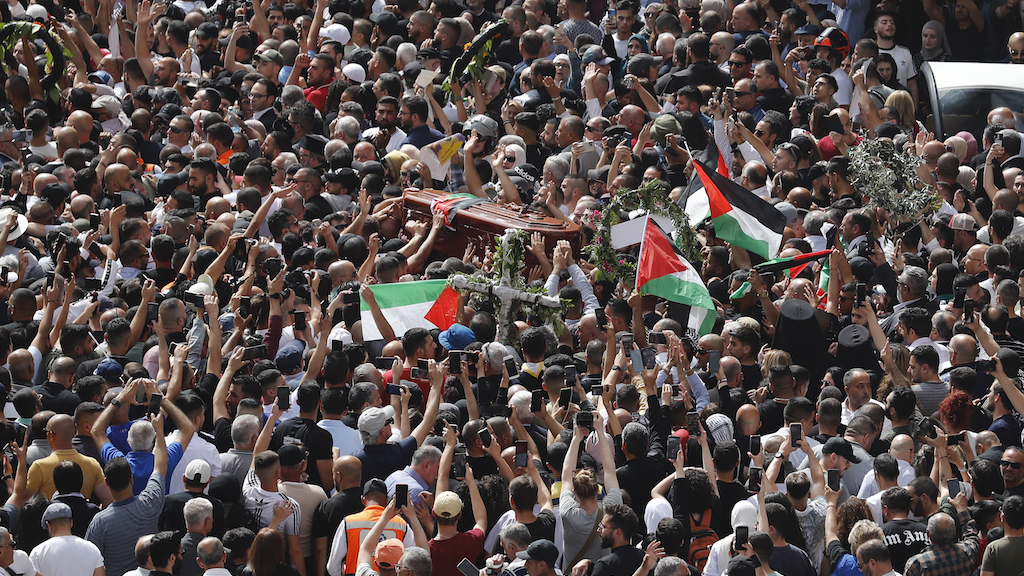 Thousands of Palestinians buried Shireen Abu Akleh, one of their star journalists killed in an Israeli operation, in Jerusalem on Friday during a funeral marked by a charge by Israeli police at the start of the funeral procession, an incident widely criticized.

The European Union condemned “the disproportionate use of force and the disrespectful behavior of the Israeli police against the participants in the funeral procession”, according to its head of diplomacy Josep Borrell.

On the side of Washington, “we were deeply disturbed to see the images of the intrusion of the Israeli police in the funeral procession” of the journalist, said the American Secretary of State Antony Blinken in a press release.

UN Secretary-General Antonio Guterres also said he was “deeply disturbed” by the behavior of “some Israeli police officers”, and his “disorder” also concerns the “clashes between the Israeli security forces and the Palestinians gathered at St. Joseph’s Hospital,” spokesman Farhan Haq said.

At the exit of the coffin of this hospital in East Jerusalem, Palestinian sector of the city occupied and annexed by the Hebrew State, the Israeli police burst into the premises of the establishment and tried to disperse a crowd waving flags Palestinians.

The coffin almost fell from the hands of the carriers jostled by the police but was caught in extremis, according to images broadcast by local television which also show the police using truncheons.

“If you don’t stop these nationalist chants, we will have to disperse you using force and we will prevent the funeral from taking place,” an Israeli policeman said in a megaphone to the crowd, according to a video released by the police.

According to the Palestinian Red Crescent Society, 33 people were injured during the funeral. Israeli police reported six arrests.

On Wednesday, the American-Palestinian journalist for Al Jazeera, Qatar TV, was shot in the head while covering an Israeli military raid in the Jenin refugee camp in the northern West Bank. , Palestinian territory occupied by Israel since 1967. She wore a bulletproof vest marked “press” and a reporter’s helmet.

This murder prompted a unanimous statement from the UN Security Council overnight from Friday to Saturday, which “strongly condemned” it.

Initiated by the United States, this very rare unanimous position of the Security Council on a subject concerning Israel also calls for “an immediate, thorough, transparent and impartial investigation” into this murder. It underlines “the need to guarantee accountability” of its author or authors, according to the text obtained by AFP.

At first, Israel claimed that she “probably” succumbed to Palestinian fire. But the Jewish state then said it did not rule out that the bullet was fired by its soldiers. The Palestinian Authority, Al Jazeera and the government of Qatar have accused the Israeli army of killing her.

The French representation in Jerusalem described as “deeply shocking” the “police violence” at Saint-Joseph hospital.

“The occupying forces did not just kill Shireen (…) but they terrorized those who accompanied her to her final resting place,” Qatar Foreign Affairs said.

After the intervention of the police, the crowd accompanied the coffin to a church in the Old City where a mass was pronounced, before going to the cemetery.

The 51-year-old journalist’s funeral took place amid fresh clashes in and near Jenin.

An Israeli policeman was killed during an Israeli army operation in Burqin “against terrorists”, according to an official statement. The Palestinian armed group Islamic Jihad said its fighters killed him.

In the Jenin refugee camp, 13 Palestinians were injured, according to the Palestinian Health Ministry.

The Israeli army has launched several operations to apprehend, according to it, Palestinians wanted in the Jenin camp, a stronghold of the Palestinian armed factions from which the perpetrators of deadly attacks in recent months in Israel originated.

The death of Shireen Abu Akleh has sparked a wave of emotion in the Palestinian Territories, in the Arab world where his reports have been followed for more than two decades, in Europe and in the United States. Several calls for a “transparent” investigation have been launched.

According to a statement from the Palestinian prosecutor’s office in Ramallah in the West Bank on Friday, “the first results of the investigation at the scene of the crime showed that the only origin of the shooting was the Israeli occupation forces”.

Before him, the Israeli army indicated that it was not possible to immediately determine the origin of the shooting according to the preliminary results of its investigation. The shot could just as easily be of Palestinian or Israeli origin, she said.

The Israeli authorities demand that the bullet be handed over to them in order to carry out a ballistic examination. They proposed that Palestinian and American experts be present during the review.

But Palestinian President Mahmoud Abbas refused a joint investigation with Israel. “The Israeli authorities committed this crime and we do not trust them.”

Protests against the journalist’s death took place in several countries and in the Palestinian Territories.

On the roof of a building in the central square of Ramallah in the West Bank, the huge billboard now displays a portrait of the journalist, accompanied by a sober message: “Goodbye Shireen, goodbye the voice of Palestine”.

Concern grows: at least 12 children dead and 450 under observation for acute hepatitis

The Domaine-de-l’Estérel, a jewel of Quebec’s modern heritage, has been demolished