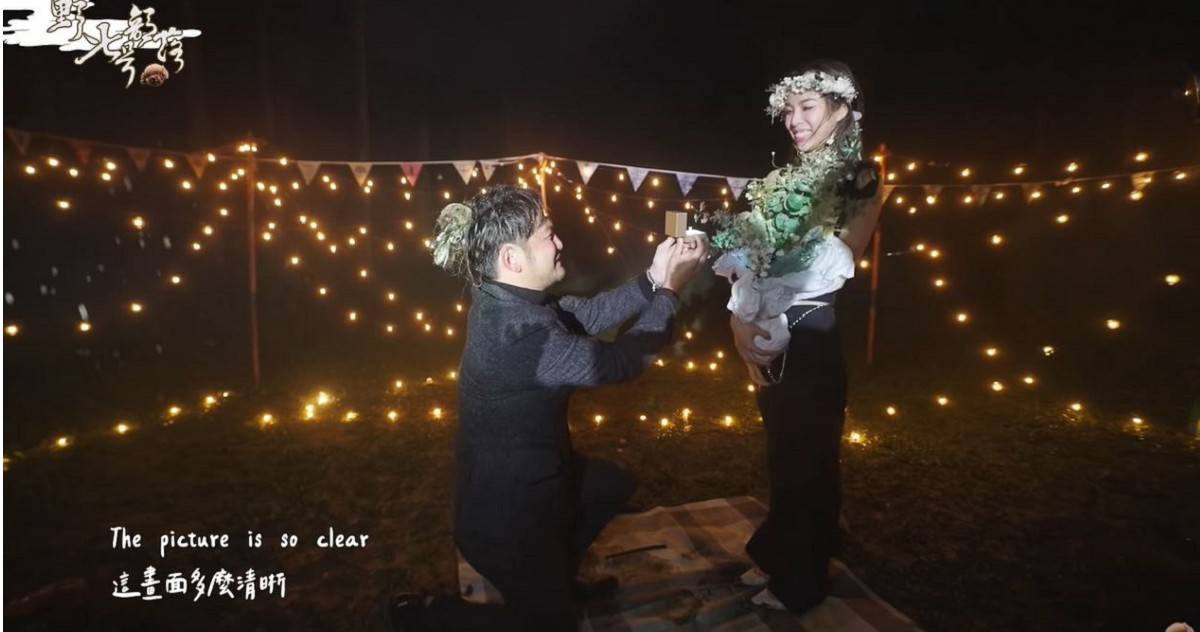 KID Lin Bosheng recently revealed the true face of his girlfriend “East District Girl”. On the eve of his 38th birthday, he announced that he would update the video on the channel to announce important life events, so that the outside world could speculate on whether to release the good news. Sure enough, after the video was exposed, it was confirmed that he proposed to his girlfriend “East District Girl”. , the whole process was recorded on the channel “Savage No. 7 Tribe”, and 4 star friends including the hip-hop god Shouzi were present at the wedding to help out.

According to “ETtoday”, KID and his girlfriend have a stable relationship, and the two often share the same channel on the same channel. This time, in order to surprise his girlfriend, he directly packaged the entire campsite, and also found a ticket of relatives and friends in Hualien, as well as members of the Savage No. 7 tribe. Partners, in addition to 4 artist friends Li Jiaying, Lou Junshuo and Jiao Fanfan, as well as the hip-hop male god Thinzi came to the scene to help out. The 4 people hid in a low-key group of relatives and friends to witness the happy moment of KID and his girlfriend, and offer blessings to the two.

On the day of the proposal, his girlfriend “Sister in the East District” rushed to the scene after get off work and took the flowers representing blessings from a friend. She was moved to tears and slowly walked towards KID who was waiting in front of her. In the video, KID emotionally said the pre-prepared marriage proposal: “Baby, people all over the world think that I can’t get married, or that I’m like a savage, there won’t be this day, but they don’t know, in fact, I After being with you for a week, I really want to marry you.”

Then KID knelt down and took out the diamond ring from his pocket, and asked gently, “Will you marry me?” The girlfriend replied playfully, “loud!” I do.” The scene was quite warm and touching. As for the follow-up plan after KID’s proposal, the agent said, “Propose first, and will share with you other good news in the future.”

The full text of KID’s Proposal Oath is as follows:

In fact, people all over the world think that it is impossible for me to get married, or that I am like a savage and will not have this day, but they do not know, in fact, after I have been with you for a week, I really want to marry you.

We never quarrel, we will hold hands every day when we go to bed, we will kiss on the mouth when we go out in the morning, we will definitely prepare toothpaste for you, yes, and then I forgot twice in the past two years, but you never forgot Anytime, even when I’m going to record a show, you will prepare my luggage very well and help me share a lot of the big and small things in my life, I feel like I’m the one who is taken care of, I’m the happiest person .

We were just chatting a few days ago, do we have any plans to have a baby, you told me that you are your father’s sweetheart, but I wanted to marry you at that time, you are my sweetheart too, how much I love you The level of taking care of you is even more than taking care of myself. I am officially proposing to you now. I hope you will agree to me, and then I will take good care of you and your family in the next days.

Trolls review-bombed Horizon Forbidden West on Metacritic – the game had a 4.5 out of 10 points