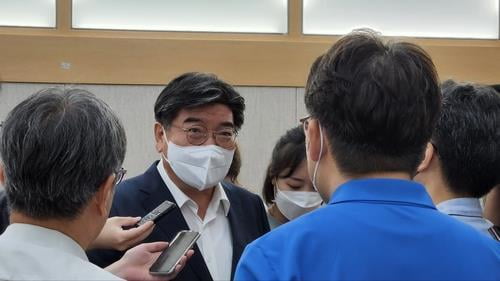 “I’m responsible for all the ugliness… I hope it will be an opportunity for the city council to normalize”
“Governor Dong-yeon Kim’s argument, the reason for the desperate need for political change… Hope for the success of the 8th popular election”

On the 31st, Kim Yong-jin, Deputy Governor of Gyeonggi-do, who caused controversy over ‘throwing a drink’, resigned voluntarily.

It has been four days since the controversy over throwing a drink at Kwak Mi-sook, the representative of the People’s Power of the provincial council, on the 27th, and three days after taking office as the vice-governor.

Lieutenant Governor Kim said in a statement regarding his resignation that day, “I am responsible for all the slight ugliness,” he said. said.

“It was brief, but it was a time when I felt a lot about local politics,” he said.

“I believe that the ultimate purpose of politics is to solve the problem of people’s livelihoods,” he said.

He said, “Even if I quit my job as deputy governor of economy, I promise that I will do my best for the success of the 8th popularly elected ‘center of change, game of opportunity’. do,” he added.

Representative Kwak filed a complaint with the police against Vice Governor Kim on charges of special assault and special intimidation on the same day, and an investigation is ongoing.

The provincial council, which occupies 156 seats in total, equal to 78 seats by the People’s Power and 78 seats by the Democratic Party, has been closed since its opening on the 12th as both parties failed to make progress in negotiations on the composition of the council, such as election of a chairperson and distribution of standing committees.

As a result, the Democratic Party proposed to organize a council of the opposition and opposition parties with the participation of the provincial executive and hold an extraordinary one-point meeting in August to deal with issues of livelihood such as the supplementary budget. holding on

In 1986, he passed the administrative examination (30th class) and served as a public innovation planning officer and spokesperson for the Ministry of Strategy and Finance, the president of Korea East-West Power, and the president of the National Pension Service.

Manchester united: Ronaldo back, everything back to normal?