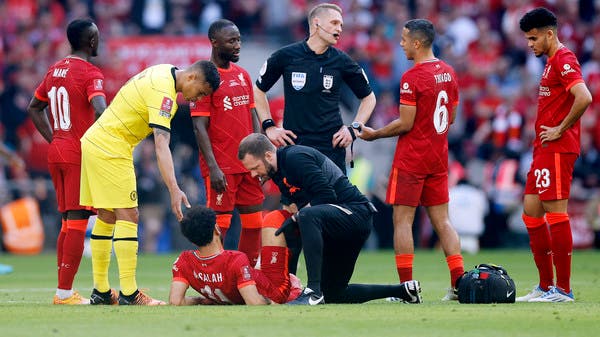 Liverpool coach Jurgen Klopp said that he would like to involve Mohamed Salah, Virgil van Dijk and Fabinho in the decisive team match next Sunday against Wolverhampton Wanderers in the last round of the English Premier League, but he stressed that he is not confident in the ability of these players to participate.

Liverpool need to beat Wolverhampton at the end of the championship season, in the hope that rival Manchester City, the leaders and defending champions, fail to beat Aston Villa, and then Klopp’s team gets a chance to crown the title for the second time in three years.

And due to injury during last week’s FA Cup final against Chelsea, Salah and Van Dijk missed Liverpool’s victory over Southampton earlier this week, while Fabinho suffered a muscle injury against Aston Villa earlier this month.

“The situation looks good, the players are taking steps and we will see,” Klopp told reporters on Friday. My preferred solution is that they all participate early next week for reasons of keeping pace. If this is not possible, then there is no problem. I can’t be 100% sure.

The German coach added, “I understand 100 percent the battle for the top scorer in the league between Salah and Son Heung-min, but we cannot take any risks.” Salah does not want to take any risks. No doubt about it.

Before the last round, Salah is the top scorer in the English Premier League with 22 goals, one goal ahead of the South Korean Son of Tottenham Hotspur, who will meet in the last round with Norwich City, whose relegation was confirmed next Sunday.

Klopp confirmed that Belgian striker Divock Origi will leave the club after spending eight years in its ranks, during which he scored a number of decisive goals.

Klopp added, “I expect Divock to have a special farewell.” For me he will remain a legend at Liverpool level and it was a pleasure working with him. He is one of the most important players I have worked with. He will achieve success wherever he goes. This is 100 percent certain.

Liverpool will also meet Spanish champions Real Madrid in the Champions League final in Paris on May 28. He has previously won two local cups, and Klopp said his career this season will be considered successful regardless of what happens against Wolverhampton.

Klopp also said: “It was a difficult but great career and I am happy to be (with the team) this season. This is an exceptional group. We have many reasons to celebrate.

Next week, 56 stocks will face lifting the ban with a total market value of 63.301 billion yuan jqknews