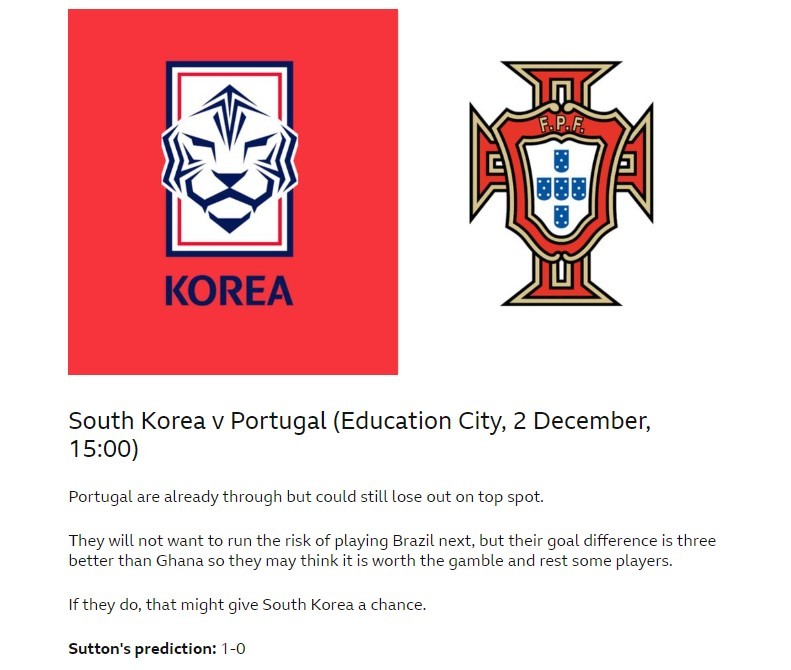 British BBC commentator Chris Sutton, who recorded a hit rate of 50% as a result of Korea’s group stage at the 2022 Qatar World Cup, predicted Korea’s victory in the third game against Portugal. Before the opening of the World Cup in Qatar, Sutton made a big sensation with ‘Human Octopus’ by hitting ‘Japan’s victory over Germany and Korea’s draw against Uruguay’.

Sutton recently posted the expected score for 16 matches in the third round of the 2022 Qatar World Cup group stage through the BBC website.

Sutton predicts a 1-0 win for Korea against Portugal in the third Group H match between Korea and Portugal at 0:00 on December 3 at the Education City Stadium in Al Rayyan, Qatar.

Portugal confirmed their advance to the round of 16 with 2 wins (6 points), while Korea lost to Ghana 2-3, recording 1 draw and 1 loss (1 point), and is in danger of being eliminated from the group stage.

On the other hand, Sutton predicted that Korea, which must beat Portugal, will be able to defeat Portugal in preparation for the round of 16.

“Portugal, who have confirmed their place in the round of 16, will not want to take risks in preparation for the tournament,” Sutton said. It will be an opportunity for Korea.”

If Korea beats Portugal 1-0 and Uruguay beats Ghana 1-0 or 2-1, Korea can dramatically advance to the round of 16. This is because Korea and Uruguay are tied with 1 win, 1 draw and 1 loss (4 points), but Korea has the upper hand in goal difference.

Previously, Sutton predicted a 2-1 win for Uruguay against Ghana. If the two matches end as Sutton expected, Korea will advance to the round of 16 for the first time in 12 years since the 2010 South Africa tournament.

For adults only, just as her mother gave birth to her.. Al-Qeshta Rana Huwaidi and leaked pictures of the MBC anchor while she was with director Khaled Youssef in her bedroom…Watch before deletion