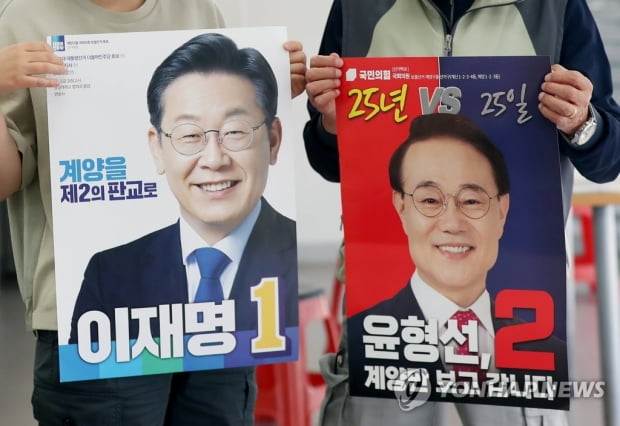 Democratic Party candidate Lee Jae-myung and People’s Strength candidate Yoon Hyung-sun, who ran for the June 1st Incheon National Assembly by-election in Gyeyang, Incheon, focused on campaigning activities on the 20th, the second day of the official election campaign, all over Gyeyang-gu.

Candidate Lee, who had been supporting the Democratic Party candidates running for the June 1 local elections until the previous day, focused on the local campaign in Gyeyang-gu on this day.

He started the day by greeting residents at Imhak Intersection and Imhak Station in Gyeyang-gu in the morning.

Then, he went to every corner of Gyeyang 3-dong, Gyeyang-gu, and met as many voters as possible and appealed for their support.

In the evening, Candidate Lee greets the residents leaving the check-out station and conducts a intensive campaign in the area.

Late at night, they plan to meet local residents while walking around the food alleys and local shops around Gyesan Station.

He said on his YouTube channel during lunchtime, “It seems like it has been 10 days since I came to Gyeyang-eul, but the residents of Gyeyang-gu and Incheon citizens warmly welcomed me from the beginning, and the heat is growing as time goes by.”

He added, “At first, the election was held 20 days after the inauguration of the president, so the prospect was dark and there were a lot of concerns about it. .

Candidate Hyung-sun Yoon is spurring the effort to raise approval ratings with the full support of the current and former leadership of the People’s Power.

The day before, Rep. Kim Ki-hyun and former lawmaker Yoon Hee-suk held a campaign for support.

Candidate Yoon started the day with a campaign at Gyeyang Station at 6 a.m., visited the Veterans’ Hall and Noonjeong Pavilion one after another, and then attended local events such as the opening ceremony of the public health center.

Candidate Yoon also appeared on YTN radio and emphasized, “My promise is already blended in the promises of the President and Incheon Mayor Yoo Jeong-bok.

He said, “Our party’s own opinion polls and unofficial survey results are much better (than those previously announced), so the party’s expectations are high.” There is hope,” he said.

With these tricks, your bathroom will always be organized