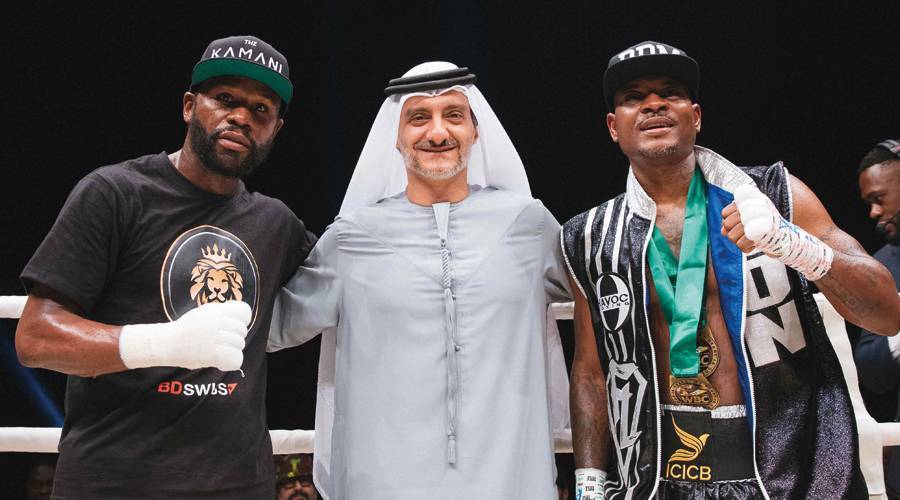 American boxing legend Floyd Mayweather performed a distinguished and exciting performance during his participation in the “Unity Boxing in Abu Dhabi” competition at the “Etihad Arena” on Yas Island.

The event witnessed a great turnout from the audience, who enjoyed rounds full of excitement and enthusiasm, with the participation of a number of the brightest stars of boxing and mixed martial arts, including the legends Floyd Mayweather and Anderson Silva.

And as the legend Mayweather promised the audience a few days ago, the American boxer gave an amazing performance during his confrontation with superstar Don Morey, which lasted for eight consecutive rounds.

During the distinguished evening, the audience interacted with boxing and mixed martial arts stars Anderson Silva, Badu Jack and Delphine Pearson after achieving victory in their confrontations during this event, which constituted one of the largest events in the list of Abu Dhabi sports events for this year.

The competitions witnessed the participation of two local stars from the UAE; They are Hani Atieu and Bruno Machado in two matches against Badu Jack and Anderson Silva, respectively, as they received great support and encouragement from the fans and the audience who love the game.

The evening was held as part of the “Your summer with us is better” campaign, to enhance the emirate’s position as a preferred tourist destination for hosting sporting events.

Abu Dhabi has established its leadership in organizing and hosting the most prominent international tournaments and competitions, including the UFC matches in 2020 and 2021, the Formula 1 Etihad Airways Grand Prix, the Abu Dhabi HSBC Golf Championship, the Indian Premier League, and the T20 Cricket World Cup.