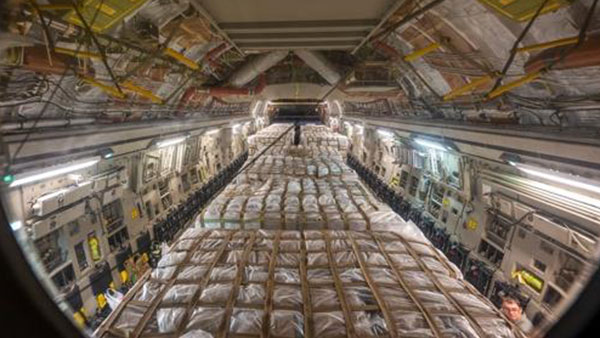 The first shipments from Germany, brought to the U.S. in an emergency due to a shortage of ‘infant formula’, arrived in the mainland of the United States on the 22nd local time.

According to the local media ‘The Washington Post’, the US Air Force C-17 transport plane carrying 31,800 kg of Nestle formula landed at Indianapolis International Airport, Indiana, on the same day.

The milk powder imported from the United States is a special hypoallergenic formula for medical use that can be given even to babies who are hypersensitive to milk protein.

U.S. Secretary of Agriculture Tom Vilsack, who arrived at the airport and greeted the plane on the same day, said, “This delivery of formula will serve a critical medical purpose.”

The milk powder transported this time is enough to feed 9,000 infants and 18,000 infants for a week, Agriculture Minister Vilsack said.

Earlier, White House press secretary Carine Jean-Pierre said in a briefing on President Joe Biden’s private plane heading to Japan after a visit to South Korea yesterday that it normally takes two weeks for the delivery of formula from overseas, but the government intervened and shortened it to three days.

The milk powder crisis in the United States was exacerbated by the closure of the plant due to a supply shortage caused by the COVID-19 pandemic, and the possibility that products produced at Abbot Laboratories’ Michigan plant, the largest US milk powder maker, could be contaminated with bacteria.

Abbott expects to safely reopen the plant around the first week of June, in which case it could take up to eight weeks for the product to become available on the market.

“A death from monkeypox is not ruled out, although it is unlikely”