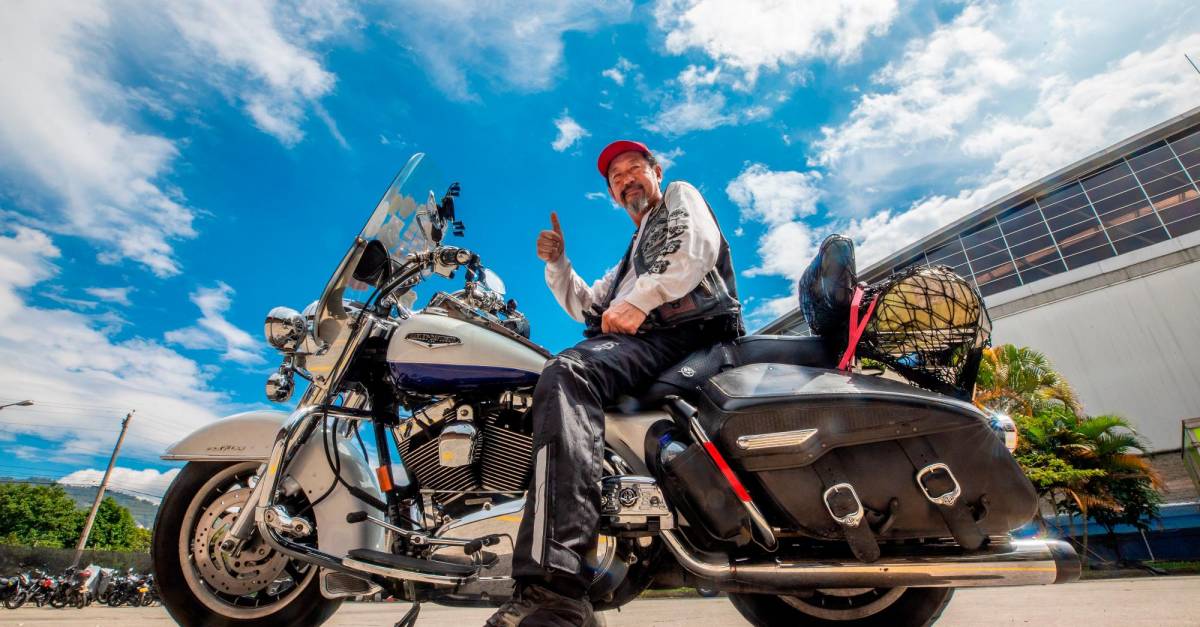 When he stepped foot on Colombian soil on his 2007 Harley Davidson Road King, Dan Park was nostalgic for his teenage years in the country.

His father was exiled from South Korea and although the first stopover was Paraguay, Colombia offered a better picture. Here, at the age of 16, he arrived with his family, fell in love, learned Spanish and was left with so many good memories that he knew he would return one day.

“Colombia is a very special country for my family. 44 years ago we were in Bogotá and Pereira. We even had an ID, we lived like Colombians, I learned a lot of Spanish, I fell in love with a woman from Pereira, I wanted to stay in Colombiabut my mother sent me to the United States, in Florida, and I stayed there”.

Park will be part of the parade Harley-Davidson Heroes of the country: old, classic, custom and special motorcycles with his motorcycle, the one he already has close to 83,000 kilometers tours in an adventure that took him out of his house 16 months ago.

This return to Colombia has meant a lot to Dan. “I cannot express it in words, I bring a love for this country that I cannot explain. In fact, next year I am going to retire and I would like to be in Colombia”.

When he left Arizona, the city in the United States where he lives, he did so riding a 2018 Harley, but the motorcycle gave him an engine failure, he fixed it and sold it to buy this Road King modelo 2007. “It is more classic, it has less electronics, more mechanics”.

On the trip he toured Milwaukee, Florida, San Diego, Baja California, in the United States; Vancouver in Canada. He also passed through Nicaragua, Costa Rica and Panama before arriving in Colombia. In Latin America it also went through Ecuador, Bolivia, Brazil, Uruguay and Argentina and begins the return to Arizona.

The border crossings were not easy to pass because of the pandemic, even Peru could not enter.

Not the entire journey has been on a motorcycle. She is she has traveled by sailboat, ferry, on a bus ship. At the mechanical level, she had to change tires in Buenos Aires, “I had to wait almost eight days to get them, it was not easy.” She also fixed the suspension, part of the electrical system and the stator, “that burned out and I couldn’t move the bike. I was in Ushuaia, Argentina, and I couldn’t get it, she had to bring it from Chile and I had the help of five bikers (whom I didn’t know) who brought it to me”. Due to this damage, he had to stay 50 days in Ushuaia, so he dedicated himself to touring the Andes in the meantime.

That kindness of the people is something that stands out, “there are many friendly people, there will always be someone to help you. More than knowing famous places that appear in magazines, I love meeting people”, he says.

He highlights the good Colombian roads, “I was on pretty bad roads in Argentina and Bolivia. In Colombia it has gone very well for me, without so much gap, a lot of curve, yes, there one gets a little dizzy.

Tips for the route

For Dan this is the first long trip and it all started in the pandemic: “Eight months at home, sitting down, my head was already thinking about something else. I told my daughters, I rented the house, I grabbed a suitcase, a motorcycle and that’s it. The first piece of advice he gives is to do short trips first before venturing on such a long one“If you dream it, you can achieve it.”

A person who wants to do it needs physical preparation, “I have been a Taekwondo instructor and I am in good condition. When I can walk a lot, about two or three hours a day, I try not to consume alcohol, not to stay up late or go out partying, eat well, consume protein, water and make good planning”. For him, the success of this trip is in the planning and he does it for weeks. As for materials, in addition to tools for the motorcycle, with a good cell phone having GPS is enough. He has been hosted by people or bikers he meets along the way, he also looks for economy in hostels. “I am connected with my family via Whatsapp and I bring a pager so they know where I am and where I’m goingthey locate me”.

He has only fallen three times, all in Bolivia on the famous “highway of death”. She got rain, fog and a lot of mud and leaving the last 10 kilometers, she fell. “When the bike falls, I get there, I can’t pick it up by myself, I have to wait for someone to pass by and help me”.

You will recognize him in the parade because the front of his motorcycle is full of decals, some are given to him, others he buys. From each country he visits, he gets a flag to hang on it, “Colombia’s is the biggest, because it occupies a very special space in my heart”.

Sepsis: the cause of one in five deaths worldwide