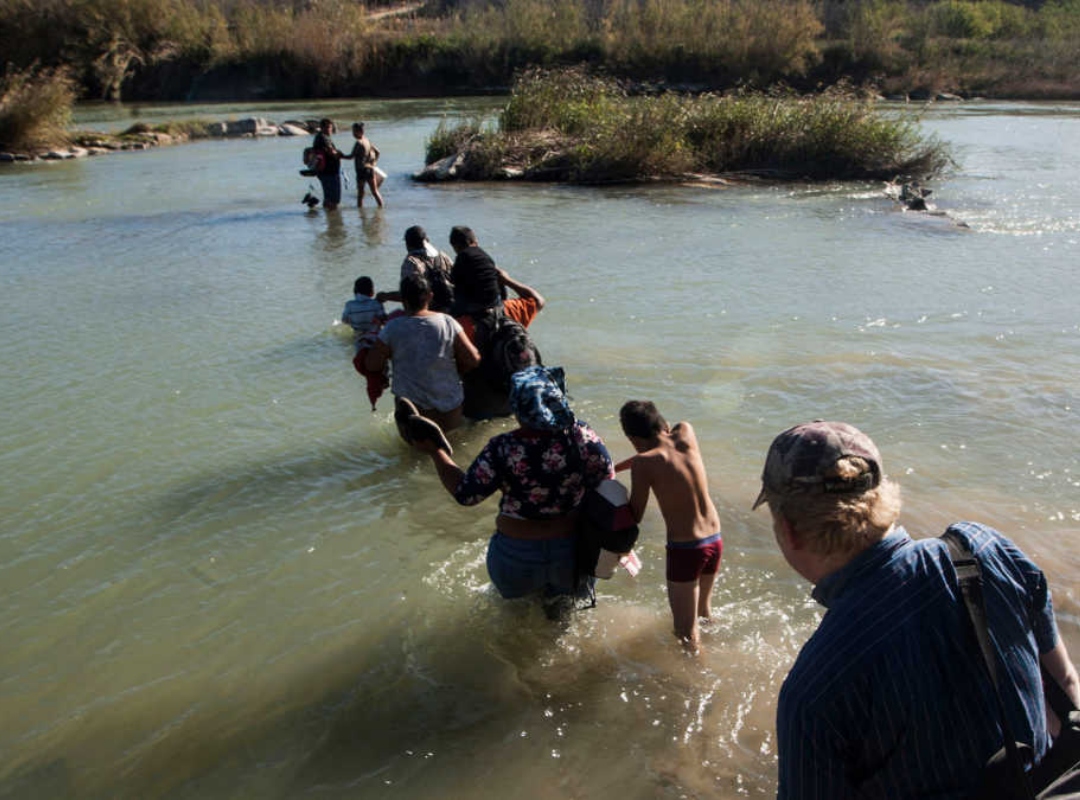 Selvin Allende is exhausted. With the one-year-old girl on their shoulders and his pregnant wife, they have just cross the Rio Grande from the Mexican city of Piedras Negras to Eagle Pass, in Texas. A dangerous journey that thousands of migrants undertake each year in search of a better future in the United States.

«I have been afraid for my daughter in the river. I feel tired, defeated, but with the dream of working if the immigration services listen to us with their hearts,” says this Guatemalan man in his 30s.

The family left their home in Honduras because of crime and lack of work, and made a long journey by train and on foot to get here.

Next to him, his wife walks with a gesture of pain, her eyes half closed, towards the Border Patrol that is waiting for them under one of the two bridges that connect Mexico and the United States. Her belongings fit in a couple of plastic bags.

Agents check their passports and those of other newcomers and take them into custody to review their asylum claims.

The scene is repeated several times a day before the resigned gaze of the security forces. “This never stops. They can cross anywhere and at any time », says a National Guard soldier who does not want to give his name.

The reinforcement of security in recent months has failed to stop the arrival of migrants without visas. In May, authorities detained more than 239,000 at the border with Mexico, a record, although the figure includes those who tried to enter the United States multiple times.

“I cry with happiness”: Migrants on their way to the US

On the Mexican shore, trucks come and go for hours to unload people who will end up crossing to the other side.

This afternoon it is 37 ºC, and some migrants cool off in the water waiting for more people to arrive with whom they can wade through a treacherous river, which claims many lives.

A Venezuelan family – five men, two women and two children – decides that the time has come. Their journey takes 10 minutes and, halfway through, they grab each other to resist the strong currents.

When they arrive on the American side, they shout for joy before turning themselves over to the Border Patrol.

Relief is seen on all faces. Alejandro Galindo, another Venezuelan who crosses the river nearby, is excited after 26 days of travel with two companions.

«I cry with happiness. I want to help my family. In Venezuela we had no future,” says the 28-year-old.

Eagle Pass, a city of 22,000 inhabitants located 230 kilometers from San Antonio, has learned to live with the daily presence of migrants.

A few meters from the international bridge, several men play golf on the yellowish grass, paying no attention to those who cross the river.

Valeria Wheeler, the director of the Mission Border Hope shelter, witnesses the challenges of the migratory wave every day.

In two years, its facilities have gone from welcoming 20 migrants a week to up to 600 a day.

Newcomers spend a few hours there, in a large warehouse with benches, bathrooms and showers, waiting for a family member to pay for their transportation to another city.

Before, they were often people who could buy a plane ticket to close to the border, but now they are poorer and walk from Mexico or Central America.

“They come with physical and emotional wounds,” says the director of the shelter, which receives only people released by the Border Patrol, those who will be able to apply for asylum after circumventing Title 42.

This measure promoted under the Donald Trump administration, which applies above all to Mexicans and Central Americans, allows the deportation of migrants without a visa even if they request asylum, under the pretext of the covid-19 pandemic.

For those trying to evade Border Patrol and removal, the journey is even more dangerous than for others.

Coyotes are one possible resource, but the price can be as high as $10,000 or worse, as the discovery of 53 people dead in a truck trailer Monday in San Antonio showed.

“We’re here so that people who come to the shelter don’t have to go through the same thing” as those victims, says Wheeler. “That’s what we work for.”

Do you know how much exercise your dog needs?