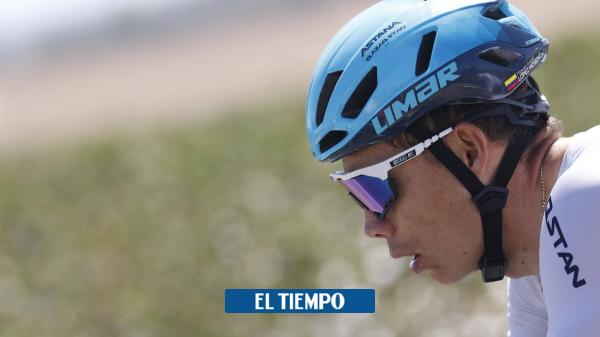 Remco Evenepoel won stage 18 of the Vuelta a España disputed between Trujillo and Alto del Piornal, of 192 kilometers and continues to lead, Miguel Angel Lopez rose to fourth place in the general classification.

The day was carried out with an attacking mentality, since the high end determined it. There was a battle from the beginning and the escape was not long in coming.

(Rigoberto Urán celebrates: the money he receives for winning the Vuelta a España)
(Piqué does not rest: the unexpected “betrayal” of Shakira for which they criticize him)

A fall occurred in the group almost at the start and the most affected were Jay Vine, leader of the mountain, who had to retire, and Carlos Rodríguez, who is fourth overall, who was badly beaten.

The fight for the podium between the cyclists forced UAE Emirates move your chips. They sent Macnulty and Soler to the front, who were the bridge for the attack by João Almeida.

The Portuguese started in seventh place overall, just 1 minute 33 seconds behind Colombian López, so there were problems in the main batch.

Astana went to the front, against Almeida’s attack, who took a minute and put the boyacense in trouble, sixth overall.

38 km from the finish line, six left at the top: Carapaz, Carthty, Higuita, Pinot, Gesink y Elie Gesbert. López quickened his pace in the main group and selected him. Rodríguez tried to stay, but he didn’t look good.

The difference between Almeida and the Remco and López group decreased. With 15 km to go it was 40 seconds.

Gesbert was in the lead at that point in the day and was being chased by Higuita, Carapaz and Carthty. Pointers had 1.04 over Almeida and 1 min 46 s over the leader’s group.

9 km from the finish, Enrique Mas launched the attack, Remco was hit. Later it was López who tried.

Remco Evenepoel He left with 8 km to go. Rigoberto Uran went with him. But they reacted from behind. The Belgian went in search of sentencing the Vuelta.

López stayed with Juan Ayuso and Rodríguez. They were close to the leader’s group.
​
Robert Gesink is the pointer, the runner of the Jumbo Visma stung in the tip. 39 s to the Remco lot and 58 s to the Lopez lot.

The boyacense platoon entered the Evenepoel group and the waters calmed down. López left 4 km away, but they closed it. And Rodríguez stayed, the hard blow hurt him.

(Miguel ‘Supermán’ López is already fourth and close to the podium of the Vuelta)
(Vuelta a España 2022: this is how the classifications go, after stage 18)

Deemed too young to undergo a mammogram, she now has stage 4 breast cancer