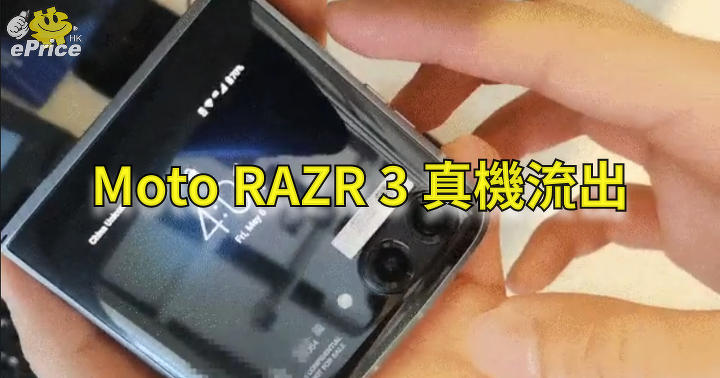 While consumers are starting to look forward to the Galaxy Z Flip4, another clamshell, the Moto RAZR 3, is on the way, and it looks like it will be released shortly. About two weeks ago, a spy photo of the Moto RAZR 3 was leaked on Twitter. Later, a whistleblower revealed that the new opportunity uses the Snapdragon 8+ Gen 1 processor. Now even the video of the real machine has been exposed for the first time.

Evan Blass, a well-known whistleblower, has made public on Twitter that it is believed to be a short Hands-on video of the Moto RAZR 3, allowing us to have a sneak peek at this Motorola flagship folding machine. The most amazing thing is that the big chin of the previous two generations no longer exists, in exchange for a narrower screen frame on all sides. The Moto RAZR 3 has a foldable screen with an estimated size of 6.2 to 6.7 inches. The screen size on the outside has also grown, estimated at 2.7 to 3 inches.

The selfie lens of the Moto RAZR 3 is said to be upgraded to 32MP, while the dual-lens camera on the outside is rumored to consist of a 50MP main lens and a 13MP wide-angle/macro hybrid lens. The news indicates that the Moto RAZR 3’s fingerprint recognition will be integrated into the power button, and with the Snapdragon 8+ Gen 1 processor, it will have up to 12GB of RAM and 512GB of storage. The manufacturer is said to provide black and blue body options. Since the positioning has been upgraded from the previous mid-to-high-end to the flagship level, the pricing is expected to increase accordingly. The mobile phone is expected to be released in China as soon as July, and will be launched in overseas markets before the end of the year. .

a meeting for an English nugget