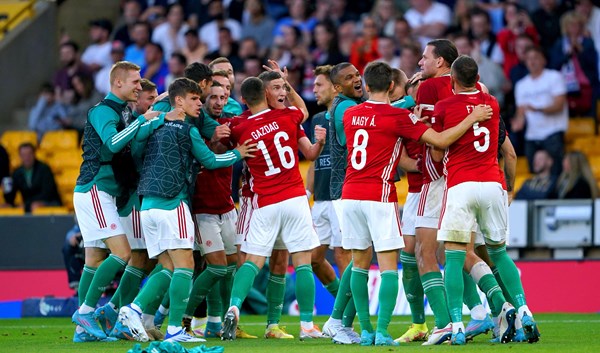 Hungary defeated England in the fourth round of Group C of the first level of the European Nations League.

Hungary swept its host England, yesterday, Tuesday, with four goals to zero, in the fourth round of the third group of the first level of the European Football Nations League.

Roland Shalay opened the scoring for the visitors in the 16th minute, and the first half ended (1-0).

In the second half, England managed to control the ball, but ineffectively, while the Hungarian national team took advantage of the opportunities that were available to it and its players managed to score 3 goals through: Roland Shalay (70th), Zolt Nagy (80th d), and Daniel Gazdag (89th), to end the match (4-0).

England defender John Stones was sent off in the 82nd minute.

With this victory, the Hungarian team topped Group C with 7 points, in front of Germany, which had 6 points, and England was at the bottom of the group’s standings with two points.

🗒️ MATCH REPORT: An impressive Hungary recorded their first away win against England since 1953 – and their second victory over the Three Lions in this Nations League campaign – to go top of Group A3…

Opening the Asian youth squash battle, “Chalitrat” ​​plans to build a training ground for the national team at SAT.