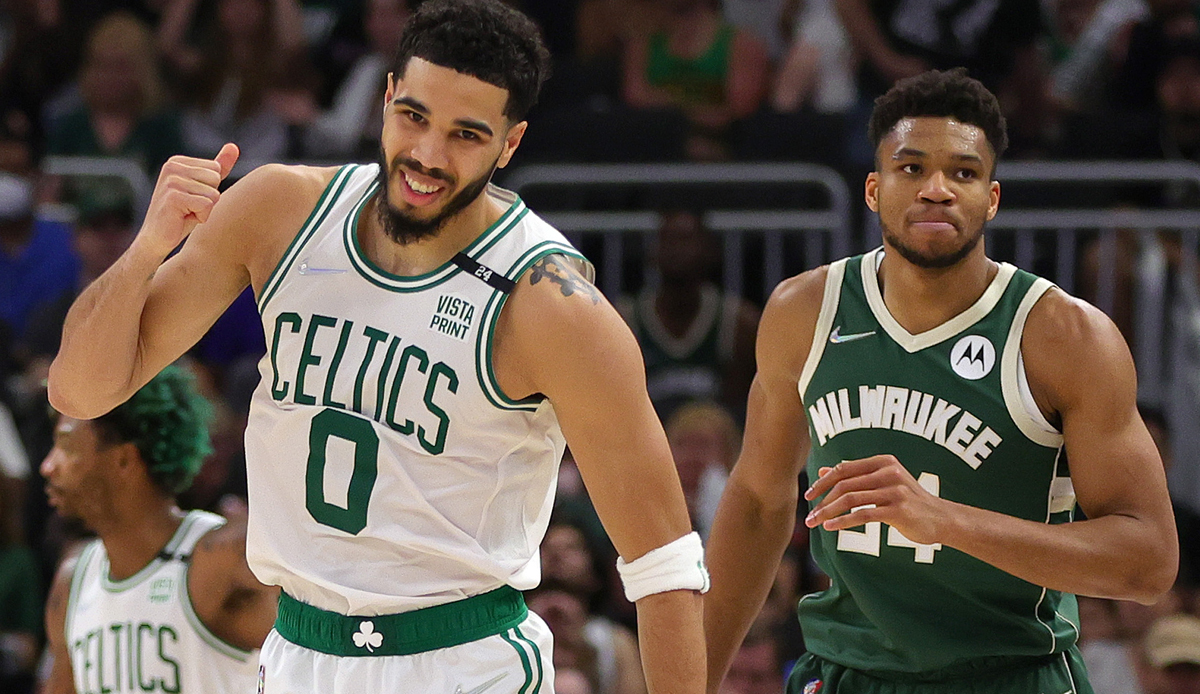 Jayson Tatum isn’t in the mood for a vacation yet! The Celtics star blasted Boston to a 108-95 win with a superb fourth quarter, forcing a Game 7. He defies the strong Giannis Antetokounmpo, who, however, is too much on his own.

Tatum finished the game with 46 points (17/32 FG, 7/15 trebles), 9 rebounds and 4 assists, only Sam Jones in Celtic’s long playoff history to have scored more points in an elimination game (47). Jaylen Brown (22) and Marcus Smart (21, 7 assists) provided support, and Derrick White (9, 5 rebounds) also put in a strong performance. Daniel Theis was allowed to play for 10 minutes and scored 4 points and 2 rebounds.

Tatum scored 16 points in the closing period alone as Boston again almost lost a comfortable lead. But the 24-year-old delivered the right answer with jumper after jumper and narrowly edged out Antetokounmpo. The Greek had 44 points (14/30 FG), 20 boards and 6 assists. But otherwise only Jrue Holiday (17, 7/17 FG) and Pat Connaughton (14, 6/8 FG) scored in double digits.

Once again Boston had to do without Robert Williams (knee), who was replaced by Grant Williams in the starting five as before. The Bucks started with the usual lineup. The game started a little late because a shot clock over the backboard failed. As a replacement, the hall crew installed two shotclocks on the floor, each positioned in the corners next to the benches. The shot clocks above the basket only worked again in the second half.

The guests picked up right where they left off. There were several threesomes at the start of the second period, and Tatum in particular apparently had no desire for an early playoff exit. After Boston had pulled away to +10, the throwing luck was lost for the time being. However, since the Bucks’ supporting cast with Antetokounmpo on the bench remained completely cold, the guests went into the half-time break at 53:43.

The start of the second half belonged to Boston. The Celtics quickly increased their lead to 18 points, while Antetokounmpo conceded his fourth foul. However, the Greek stayed on the court, Milwaukee started a run when Boston’s shooting finally cooled down. With more ball movement and several penetrations, things went better for the Celtics offense – 82:70 for Boston.

Single-handedly keeping the Bucks at bay, Brown provided vital support from downtown and returned to +11 midway through the half. The Celtics didn’t let this lead be taken away, the Bucks fans left the hall early. The all-important game 7 will now take place on Sunday, tip-off is at 9:30 p.m. German time.

The star of the game: Jayson Tatum

In the meantime, the 24-year-old went through a small phase of weakness, but he shook it off in time for the fourth quarter. When the Bucks threatened to turn the game around, Tatum was there. His answer: ice-cold jumpers, outstanding shotmaking and 11 Celtics points in a row. This man doesn’t want to go on vacation yet.

The flop of the game: Grayson Allen

The game ended with a point difference of 13 – and Allen was up/down -29! That summed up the performance of the 26-year-old quite aptly. Defensively, the Celtics picked him out as a weak point, offensively he was no help either (3 points, 1/7 FG). Correctly, he was no longer on the court in the fourth quarter.

You could also name a few Tatum crunchtime jumpers here, but on that one Poster by Antetokounmpo there was ultimately no passing. The Greek initiated the Bucks’ comeback in the meantime: he got the ball as a roll man against Boston’s drop coverage, attacked with a run into the zone and punished two defenders at once for the idea of ​​getting in the way of the freak to want.

NBA Playoffs: Celtics vs. Bucks – The series at a glance