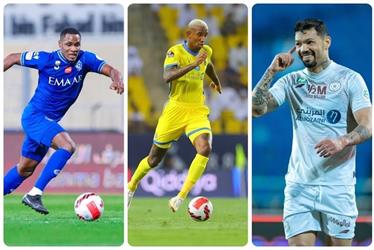 The 2021-2022 season of the Prince Mohammed bin Salman Professional League ended with Al Hilal winning the third title in a row.

Al-Hilal won the title after a fierce competition with Al-Ittihad, which ended with the crowning of the defending champion by only two points from the Brigadier General.

The last season was one of the most difficult and longest sporting seasons in Saudi football, and the struggle of the front and the relegation was intense.

“Sport 24Highlights the most successful deals of the past sports season, according to numbers and statistics.

Brazilian professional Anderson Talisca proved that he was one of the most successful deals for Al Nasr during the past season (2021-2022).

The Brazilian professional became the first player in the ranks of Al-Nasr to score 20 goals in the league since Moroccan Abdel Razzaq Hamdallah, and “Talisca” participated in 28 games, scored 20 goals and assisted two goals in the league, and scored a goal in the King’s Cup competition.

The Nigerian striker started the season in the youth club shirt and appeared at a good level, but he exploded since joining Al Hilal in the last winter transfer window.

Ighalo played 22 games with Al Hilal, scored 17 goals and made 3 others in all competitions.

The goalkeeper of Al-Fayhaa Club, the Serbian professional Vladimir Stojkovic, was an important factor in the distinguished season of Al-Fayha Club.

Stojkovic contributed strongly to crowning Al-Fayhaa the Custodian of the Two Holy Mosques Cup for the first time in its history, at the expense of Al-Hilal with penalty kicks, in addition to remaining in the professional league.

The Serbian goalkeeper played 32 games last season and managed to keep his nets in 15 full games.

Portuguese professional Carlos Junior represented the pleasant surprise for Al Shabab club during the last season of the Pro League.

Carlos Junior scored 13 goals in the league competition only with Al Shabab during the last season, after participating in 23 games and making 3 goals.

In general, Carlos Junior participated with Al Shabab in 30 matches and scored 22 goals in all competitions.

The transfer of Moroccan star Abdel Razzaq Hamdallah to Al-Ittihad after the termination of his contract with Al-Nasr Club was accompanied by widespread controversy.

In digital terms, Hamdallah constituted a strong addition to the Al-Ittihad club’s attack and formed a dangerous duo with the Brazilian top scorer Romarinho.

Hamdallah participated with Al-Ittihad in 15 matches, scoring 13 goals and making one goal.

Bale ready to be Batman again; But…