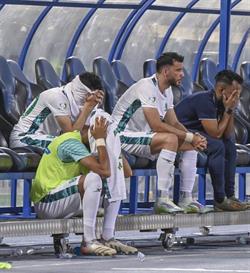 Al-Youm newspaper sources revealed that Al-Ahly’s board of directors, led by Majid Al-Nafi’i, is in the process of accepting some offers made to its players after the team was relegated to the first division (Yellow League) in the new season (2022-2023).

The sources toldSport 24Al-Nafie’s administration is working during the coming period to agree to loan some players or final transfer, in order to benefit from the financial return from selling players after the announcement of the relegation of the first team to the “Yellow League”.

The sources indicated that there are a number of offers for professional and local players, including those who are in the first football team, from several clubs, and that the administration is looking for solutions to get rid of the financial burden the club is facing in the current period.

The sources explained toSport 24“There are a number of players who expressed their dissatisfaction with what happened during this last season in the Prince Mohammed bin Salman Professional League, in terms of mishandling and the inability to technically manage the crisis within the team, and interfering in the dressing room in the wrong way, which affected the system, and caused a request Some players leave.

8.1 Billion Penthouse Clara How much is all the jewelry she wore… TEN proud of luxury

The body must be strong! A collection of ‘how to prepare’ to prevent diseases that come with rainy season | TrueID Creator