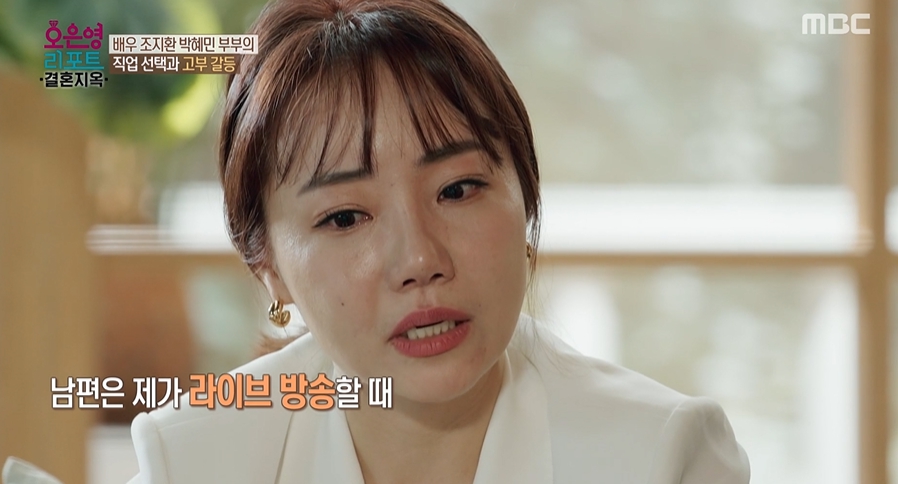 Park Hye-min, who took on the role of a show host after 11 years of working as a nurse. Her husband had a hard time doing a show selling stuff with her wife when she returned home from her part-time snack shop job. When it came to broadcasting, she said that she participated diligently, but when it was over, her emptiness flooded in. During the one hour broadcast, the two sold only three and could not hide their bitterness.

Cho Ji-hwan expressed dissatisfaction with the fact that the sales did not increase and were horizontal. However, Park Hye-min persuaded, “If you ask people who do live commerce, they say that one year is negative.”

In an interview with the production team, Jo Ji-hwan said, “It’s been 20 years since the friends I worked with on ‘Silmido’, but I still have friends who do nothing but do this. Even though we’re married.

Jo Ji-hwan laughed bitterly, saying, “It’s annoying. But I don’t want to regret the past when I couldn’t save money.

Park Hye-min did a two-hour live broadcast after the sales broadcast ended. Park Hye-min said that she “dances broadcasts. So, it’s frustrating for a husband who doesn’t make any effort. If we do this, the road will be opened,” he said. Park Hye-min danced hard while broadcasting live on SNS right after her husband and wife fight, and So Yu-jin, who was watching it, shed tears.

Oh Eun-young asked how she was making a living for her family. Jo Ji-hwan said, “There is a certain amount of income that comes from going out of the tteokbokki house. I live with my wife’s irregular live commerce income and a small amount of income through SNS. I am living while holding on and repaying the loan when I receive an appearance fee or a large sum of money.”

Even on Jo Ji-hwan’s birthday, the two of them hesitated to order galbitang. Park Hye-min surprised everyone by suggesting that she eat cookies with milk on her birthday morning. Park Hye-min confessed to Jo Ji-hwan, “I borrowed 50,000 won from an acquaintance because the check card didn’t work to put in oil.”

Park Hye-min said, “It’s really like a day-to-day life. We earn every day and live each day. Our wealth was negative. One of the two has to take responsibility for their livelihood, but my husband works part-time with tteokbokki all day, so I can’t make videos or sell (live commerce) for 4 hours. In the end, I earn 40,000 won a day. Even so, I can only pay monthly rent.”

Meanwhile, ‘Eun-Young Oh Report’, which is aired every Monday at 10:30 pm, is a real talkmentary that observes the daily lives of couples who have become less good than others, and they directly appear in the studio to share the concerns of the couple’s conflicts.

Identification of the mechanism of aggravation of tuberculosis by viral infection