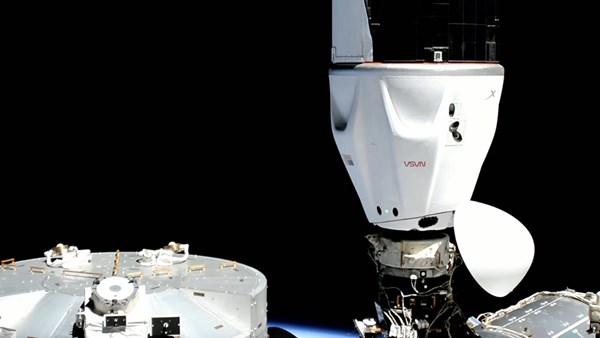 The arrival of the Crew Dragon capsule on Wednesday to the station less than 16 hours after its launch from the Kennedy Space Center in Cape Canaveral, Florida, US, marks one of the fastest flights launched by SpaceX

Four astronauts, three from NASA and one from the European Space Agency, arrived at the International Space Station after docking SpaceX capsule which brings them back to the station just two days after the last crew that left it returned to Earth.

Video of Dragon’s Draco thrusters moving the spacecraft closer to the @Space_Station pic.twitter.com/0zBNYgAcDb

Commentators of the NASA broadcast on the Internet said that Crew Dragon capsule Wednesday to the station, less than 16 hours after its launch from the Kennedy Space Center in Cape Canaveral, Florida, US, marks one of the fastest flights from launch to docking by Elon Musk’s SpaceX to the International Space Station.

And “NASA” reported that the fully automated docking occurred at about 7:37 pm EST (2337 GMT), while the Crew Dragon capsule, dubbed “Freedom”, and the space station were flying approximately 420 kilometers above the mid-Pacific Ocean. .

The crew consists of three American astronauts from NASA, including a doctor-turned-astronaut and a geologist specializing in landslides on Mars, as well as an Italian astronaut from the European Space Agency.

Watch Dragon and the Crew-4 astronauts dock with the @space_station → https://t.co/X7abHvGtMp https://t.co/d6l9cjPCgl

After the premature docking, the crew spent two hours performing routine checks for leaks and the pressure equalization of the chamber between the capsule and the ISS before opening the entry doors.

The team that would replace him, consisting of four astronauts, three Americans and a German from the European Space Agency, greeted them with hugs and handshakes. That team is scheduled to finish its mission next week.

and this is Fourth mission launched by “NASA” To the International Space Station aboard a SpaceX vehicle since the private rocket project founded by Musk, who is also the owner of Tesla, began flying with NASA astronauts in 2020.