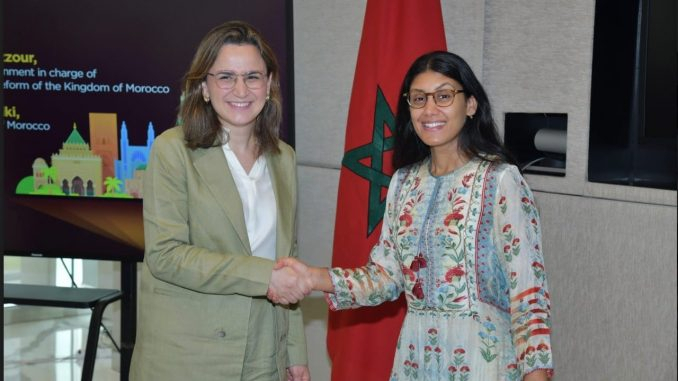 The Minister of Digital Transition, Ghita Mezzour, and the President of the Indian IT giant, Hindustan Computers Limited Roshni Nadar Malhotr chaired yesterday, Saturday May 28, 2022 in Noida, India, the signing ceremony of a memorandum of agreement relating to the realization of an investment project in Morocco.

The project aims to create thousands of high value-added jobs in the outsourcing sector, particularly in the field of coding, software and IT services.

The ceremony took place in the presence of Morocco’s ambassador to India, Mohamed Maliki, and representatives of the Moroccan Agency for the Development of Investments and Exports and MedZ (Moroccan leader in the planning and development of water parks). outsourcing).

This memorandum of understanding marks the installation in Morocco of an Indian outsourcing giant, which operates in fifty countries and employs more than 200,000 people worldwide with a turnover of more than 11 billion dollars. in 2022.

Hindustan Computers Limited (HCL Technologies) plans to establish a “delivery center” in Morocco, with the aim of producing high value-added technological services for its global customers, said a press release from the Ministry of Digital Transition and Administrative Reform.

The company also intends to invest in the initial and continuous training of Moroccan talents in the digital field, the same source said.

This strategic initiative by HCL Technologies will enable it to extend its production and delivery capacities on a global scale, relying on the strategic position of the Kingdom through its geographical proximity to Europe, its status as a gateway to the rest of the African continent, as well as its connectivity and the wealth of Moroccan IT talent.

The new partnership is in line with the Royal Vision of His Majesty King Mohammed VI, who called for promoting Morocco as a preferred destination for foreign investment in new markets such as India.

This memorandum of understanding marks an important strategic choice for the Indian market, which represents more than 52% of the global IT outsourcing market. Morocco is now one of the top three outsourcing destinations in Africa.

This memorandum of understanding was concluded within the framework of the visit of a Moroccan economic delegation to the Republic of India, led by Ghita Mezzour, Minister Delegate in charge of Digital Transition and Administrative Reform.