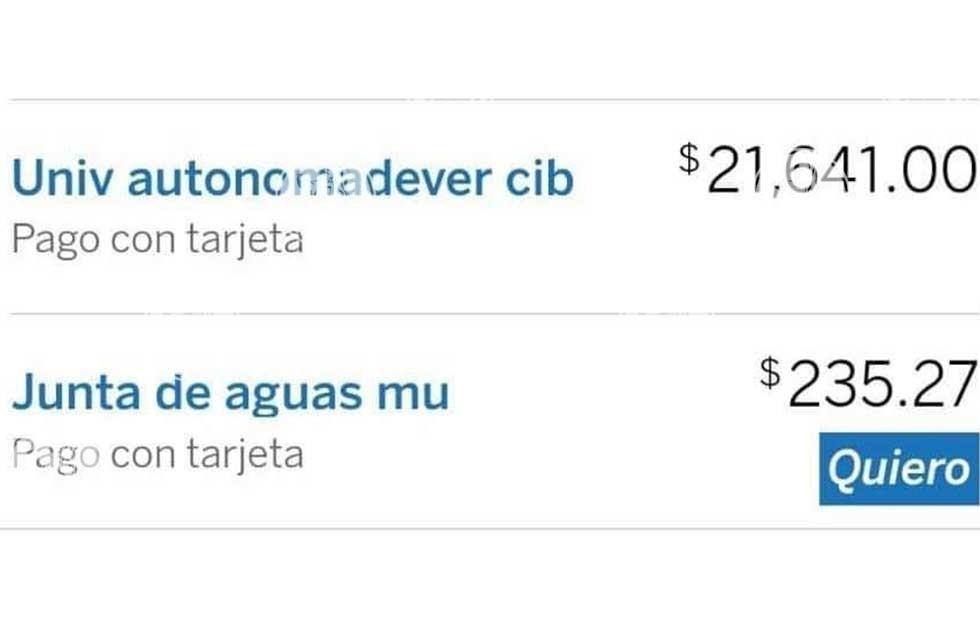 Juarez City.- When last Sunday, June 26, José Manuel made his punctual payment for the service to the Municipal Water and Sanitation Board, I never imagined that what was just 600 pesos, amounted to a charge of more than 24 thousand pesos.

According to José Manuel, at the time of making his payment on the decentralized page, he entered his personal data, as well as his card number, and immediately the screen went blank and he was notified of charges in a department store, as well as in a university in the southern part of the country.

“I received a notification for movements on my card, at that time I called the bank because I did not recognize them, one was to Palacio de Hierro for 17,999 pesos and another to the University of Villahermosa for 6,079 pesos,” he explained.

He indicated that last Monday he received a negative response from the BBVA bank, which ensures that it was the user himself who authorized the movements, so the complaint does not proceed.

However, on Thursday he began to see other Juarenses affected in the same way on social networks.

“What I do is that I begin to contact those affected, and in a Facebook group everyone who has the same problem begins to be added, right now we are more than 30 people from different sectors of the city and with credit cards. mainly, but also debit from BBVA, Santander and Scotiabank banks,” he said.

He indicated that in the same way he has given himself the task of alerting people on Facebook, so that if they find themselves in the same situation, they contact him on his José Manuel Melchor account and join the movement to demand a response from the JMAS .

He recalled that among those affected is a systems engineer, who was one of the first to contact the JMAS to report the situation, so she was contacted by the Systems department to ask if she had not entered other pages before the happened.

“Really what I think happened is that the JMAS page was hacked and our information was stolen to make the charges, among those affected there are people who have collections from universities in Guadalajara, Puebla and even Infonavit,” said José Manuel.

He commented that there has already been an approach with the spokesman for the Water Board, but the only answer is that they are going to investigate, so those affected will go to the central offices next Monday at 11:00 in the morning, to meet with the owner, Sergio Nevárez.

“They do not measure the magnitude of what happened, now I have about 10 days to solve this or I will have to pay more than 24 thousand pesos, they must respond,” he said.

He added that as a citizen, in addition to seeing his information violated, he is the only one affected, because if in the end neither the bank nor the JMAS respond to him, he must assume the consequences.

“I feel bad, it is a large amount, the bank will not forgive me or give me a term to pay and if I do not pay them on time they will charge me interest, I can even see my credit history affected if they put me in the Credit Bureau “, he concluded.

Florida: flight to Cuba makes emergency landing due to fire in the hold