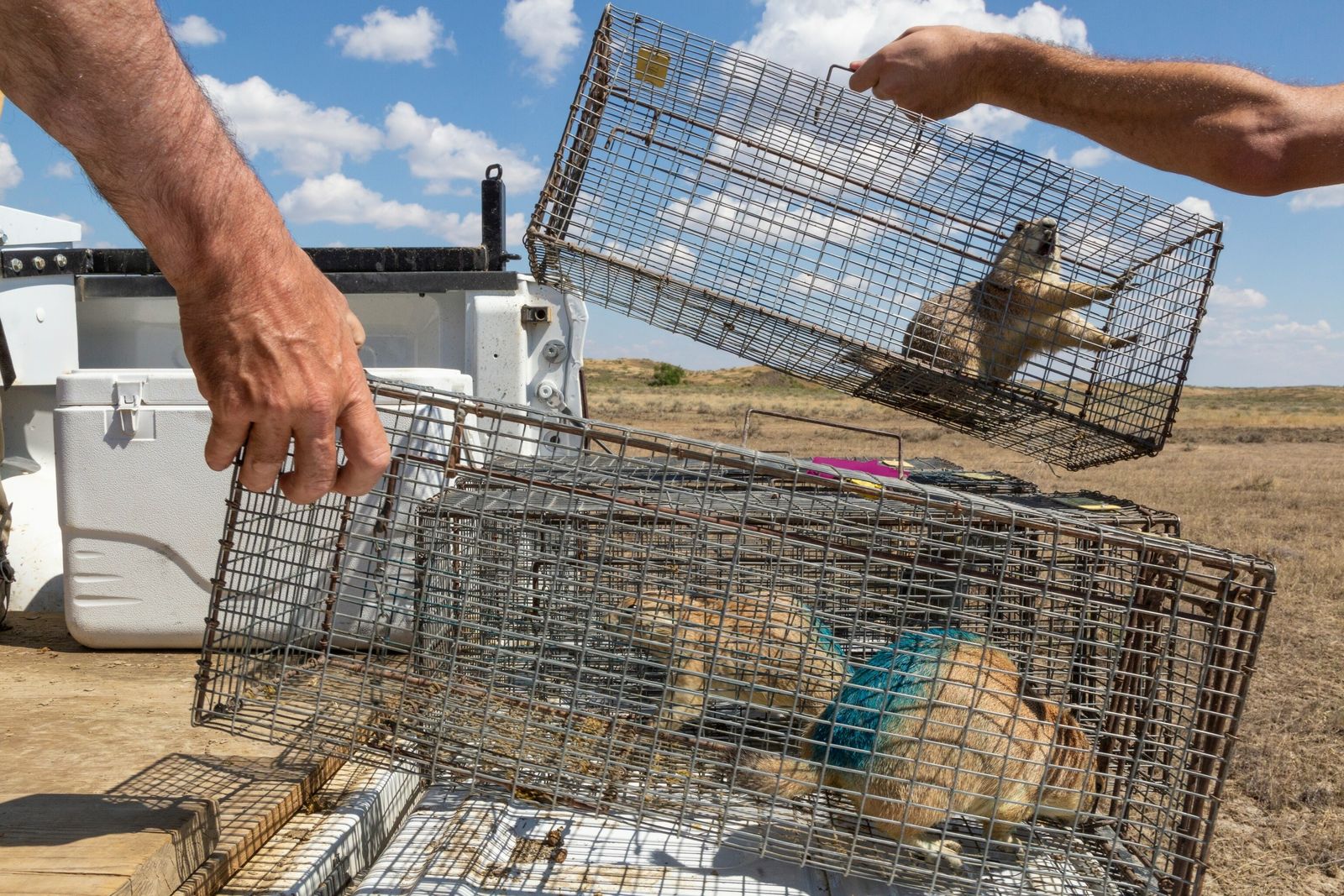 “It’s a very rare infection,” says Dave Wagner, director of the Biodefense and Disease Ecology Center attached to the Pathogen & Microbiome Institute at the University of Northern Arizona. “As I always say, look both ways before crossing instead of worrying about the plague. »

How to explain these rare plague epidemics? What is the real risk for humans today? Here are the answers to all your questions.

WHICH ANIMALS TRANSMIT THE PLAGUE?

Caused by bacteria Yersinia pestisthe plague is a zoonosis, a disease transmitted from animals to humans. In addition to bubonic plague, there are other formssuch as septicaemic plague, which circulates in the bloodstream, and pneumonic plague, which develops in the lungs and is the only form transmissible between humans.

The most horrific plague pandemics are often attributed to the black rat. However, as Wagner asserts, this animal that inhabits our cities and our countryside is far from the only culprit. “The disease primarily affects rodents and their fleas,” he says.

Fleas live off the blood of mammals and they particularly like rodents, not just roof rats. When a rodent is infected with Y. pestis, he quickly transmits the pathogen to his fleas. When the rodent dies, the fleas infect a new host, sometimes a human. A study conducted in 2018 showed that the transmission of plague in Europe was not so much due to rats, but rather to fleas and lice living on humans.

Scientists aren’t sure what makes rodents such good hosts for Y. pestis. Wagner evokes a link with their tendency to live in burrows where fleas are numerous. Rodents also show a high concentration of the bacteria in their blood, at least compared to other animals. As he explains to us, fleas can only drink a small amount of blood, so there must be a lot of bacteria in that sip to infect the flea.

The species that carries the plague varies by region. In Madagascar, for example, the black rat remains the most common host. On the other hand, in North America, the plague is more present among prairie dogsas well as other endemic rodents such as wood rats and squirrels.

Scientists have also detected traces of the plague in wild animals other than rodents, including rabbits, deer, black-footed polecat, cougars, coyotes and even in some domestic cats or dogs. These animals can contract the disease after eating an infected animalor simply being at the wrong time at the wrong time when an infected chip is looking for a new host.

“Imagine the reaction of a dog if all the dogs in the prairie die [de la peste] in their burrows and a delicious smell emanates from them,” illustrates Wagner. “They’re going to go dig the burrow. »

Scientists say it’s unclear whether these animals simply contracted the plague from rodents or whether they too are responsible for sustaining the disease. Perhaps the prairie dogs bear the brunt, as the effects of the plague are particularly noticeable on their usually dense and active colonies.

“If prairie dogs go extinct, the first suspect will be plague,” Wagner said.

IN WHAT AREAS OF THE UNITED STATES ARE OUTBREAKS OCCURRING?

Black rats likely brought the plague to North America in the early 20th century, when the continent’s first case was recorded in San Francisco. Based on historical records and genetic studies conducted on this specific strain of the bacterium Y. pestisthe clandestine rats would have disembarked from a steamer coming from Hong Kong before invading the city by mingling with the local rodents.

The bacteria spread across the western United States, where it began circulating among native populations of small rodents, never going any further. Cases today typically occur west of the 100th meridian, the longitudinal line connecting North Dakota to Texas along the Great Plains.

No one really knows why. Chief of the Bacterial Diseases Service of the CDC’s Division of Vector-Borne Diseases, Paul Meadindicates that some port cities in the eastern United States have been affected by epidemics. Florida and other parts of the southern United States also experienced outbreaks, but the plague never managed to take hold in those places. Scientists believe this may be related to characteristics of western soils associated with the burrowing lifestyle of local rodents.

“The current hypothesis is that these factors provide an ecological niche for plague to persist and exist,” Mead said. It is possible that the arid soil of the western United States is a better breeding ground for the plague and the organisms that help it replicate and survive. Nonetheless, Mead and other experts agree that the geographic restriction of plague cases to the western United States remains mostly a mystery.

Current outbreaks are mostly occurring in rural areas, where rodent colonies tend to be larger. Improved sanitation facilities and building codes in cities have helped reduce the number of urban cases, although outbreaks still occur occasionally, as in 2007 within the Denver City Park squirrel population.

Each year, a dozen cases of plague are reported in animals, usually during the summer, according to Mead. However, we do not yet know exactly what is causing this wave of infections. There seems to be an “environmental trigger, a moment when the conditions are right for the disease to emerge from whatever reservoir it is, to these more visible species,” says Wagner.

WHAT RISKS FOR MAN?

Humans are unlikely to contract the plague, but if they do, the disease is no longer a lethal punishment for those who have access to the wide range of antibiotics designed for its treatment. Although some are concerned about the potential emergence of antibiotic resistant strains that would affect the calculations, scientists say the current risk remains low.

On the other hand, plague poses a low risk to citizens of Western countries like the United States, as they generally spend little time in flea-infested areas. Most fleas choose their preferred species for food. Once installed on a host of this species, it is unlikely that the flea will jump on another animal before the death of this host.

In some rare circumstances, humans can be infected by an intermediate animal. Thus, it happens that dogs come home with infected fleas. The domestic catsnot very vulnerable to respiratory forms of the plague, can infect those around them through a sneeze and other respiratory droplets, just as colds, flu and COVID-19 spread.

In order to avoid infection, Mead says it’s important for people living in or visiting rural areas in western states to pay attention to their surroundings, such as reporting possible multiple prairie dog deaths to the local public health authorities. Pets should also be treated for fleas and kept away from areas populated by colonies of prairie dogs.

WHY NOT TRY TO ERADICATE IT?

Although the risk for humans is low, the disease represents a greater danger for certain vulnerable species, in particular the black-footed polecat, a species in danger of extinction. The plague is one of the main threats to the survival of the species. In recent years, biologists have launched pioneering initiatives to save polecats by vaccinating them against the plague.

Nevertheless, according to Mead, the United States is unlikely to generalize vaccination efforts in an attempt to eradicate the plague. What’s more, such efforts may prove futile, he continues, because eradicating a disease requires understanding how it is transmitted. At the moment, plague is endemic to the western United States, and scientists still don’t know how the disease persists outside of outbreaks. Plague could survive in the soil or be transmitted within animal populations where it is more difficult to detect epidemics. The risk would be to eradicate the plague in an area thanks to vaccination to finally see it emerge elsewhere.

“It’s a bit like prairie fires,” Mead says. “Let’s just remember that in the western United States, the plague will be around for a while yet with a low risk of infection. »

Solidarity Income 2022: On what date will the following payments be made and what are the amounts | ANSWERS