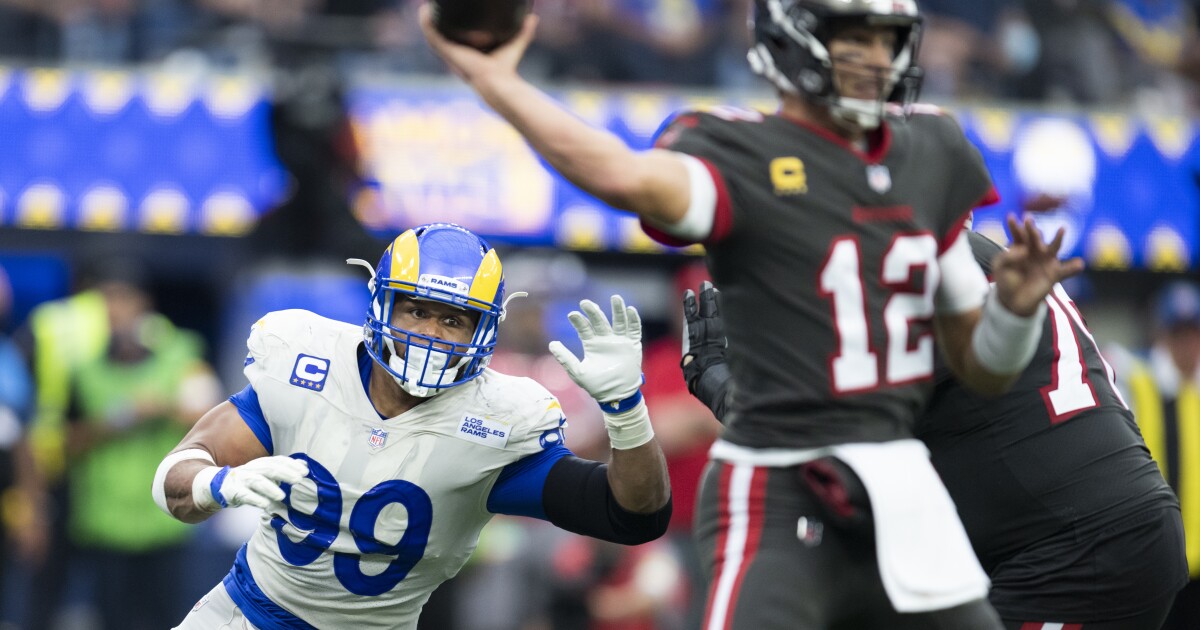 A day after his team baffled a quarterback playing in his first playoff game, Rams coach Sean McVay and his staff set about shutting down the most successful quarterback in NFL history.

Tom Brady, a seven-time Super Bowl champion, isn’t quite as agile as the Cardinals’ Kyler Murray, but at 22 years in the business, he poses a myriad of problems for the Rams because of his talent, skill and playoff experience. .

All of that will factor in when the Rams take on the Super Bowl champion Tampa Bay Buccaneers in an NFC divisional round game on Sunday at Raymond James Stadium in Tampa, Florida.

“He senses exactly what’s going on,” McVay said of Brady during a video conference call with reporters Tuesday, “and so I think the best way is to try to put pressure on him, move him out of his spot, we have to be able to anticipate his movements.” .

“Easier said than done. That’s why he’s the most successful quarterback of all time.”

Brady, 44, finished the season ranked first in the NFL in passing yards and touchdown passes. He completed almost 68% of his attempts for 5,316 yards and 43 touchdowns, with 12 interceptions.

After their 34-11 win over the Arizona Cardinals on Monday night, several Rams said they respect Brady, who is 35-11 in postseason starts, but are up for the challenge.

“Tom sees the whole field, and we all know Tom’s experience in the playoffs,” outside linebacker Von Miller said. “It’s unbelievable, but we have to play very well to have a chance.”

McVay has faced Brady three times. In Super Bowl LIII, at the end of the 2018 season, Brady completed 21 of 35 passes for 262 yards, including an interception, in the New England Patriots’ 13-3 win over the Rams that gave Brady his sixth Super Bowl title.

But Brady is at his best in the playoffs. Last season, he helped the Buccaneers become the first team in NFL history to win a Super Bowl at their stadium.

The star-studded Rams want to repeat the feat.

Brady opened this season’s playoffs on Sunday, completing 29 of 37 passes for 271 yards and two touchdowns in a 31-15 win over the Philadelphia Eagles. He was shot down four times.

The Rams entered the playoffs with 50 sacks, which ranked third in the NFL, and dropped Murray twice on Sunday. Lineman Aaron Donald is the best on the team with 13 sacks. Outside linebacker Leonard Floyd has 9½, Miller six.

Since they played Monday night, the Rams have a short week to prepare for the Buccaneers. The players had rest on Tuesday. The Rams had a light workout Wednesday and full practices Thursday and Friday before leaving for Tampa on Saturday.

For a team that endured a coronavirus outbreak and played a game against the Seattle Seahawks that was moved from Sunday to Tuesday, a short week is nothing to worry about, McVay said.

“Normal is not normal this year,” he said. “We haven’t really had a lot of normalcy in the last six, seven weeks.”

Left tackle Andrew Whitworth will continue to be evaluated for knee and ankle injuries, while cornerback David Long Jr., who returned an interception for a touchdown on Monday, is being evaluated for a knee injury, McVay said. Linebacker Ernest Jones and running back Darrell Henderson, who have been on injured reserve, could return to practice this week, opening a 21-day window for their potential return to the roster, McVay said. … The Minnesota Vikings have requested permission to speak with defensive coordinator Raheem Morris to interview him for their head coaching job, a person with knowledge of the situation said. Offensive coordinator Kevin O’Connell has received requests from the Vikings, Denver Broncos and Houston Texans, and running backs coach Thomas Brown of the Miami Dolphins, the person revealed.

HSBC closes branches due to covid-19