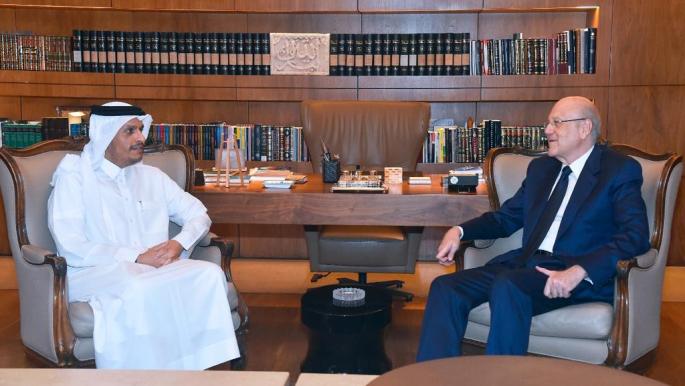 The Deputy Prime Minister and Minister of Foreign Affairs of Qatar, Sheikh Mohammed bin Abdul Rahman Al ThaniHis meetings with Lebanese officials in Beirut, which he is visiting to attend the consultative meeting of Arab foreign ministers at the invitation of Lebanon.

Today, Friday, the Qatari Foreign Minister met the Speaker of the Lebanese Parliament, Nabih Berri, at the headquarters of the second presidency in Ain al-Tineh, without making statements after the meeting, according to Lebanese media.

During the meeting, as reported by the Qatar News Agency (QNA), they reviewed bilateral cooperation relations between the two countries, developments in the region, in addition to a number of issues of common interest.

During the meeting, Mikati stressed, according to the same source, the strength of bilateral relations in all fields, expressing thanks to the State of Qatar for its announcement of a contribution of $60 million in support of the Lebanese Army.

He said that his country “values ​​Qatar’s permanent support for its military and security forces, which is universally appreciated by all the Lebanese, and helps the country to overcome the difficult stage it is currently going through and maintain stability.”

1/2 Caretaker Prime Minister Najib Mikati received Qatari Deputy Prime Minister and Minister of Foreign Affairs Sheikh Mohammed bin Abdulrahman Al Thani this evening at his residence.
During the meeting, President Mikati affirmed “the strength of relations between Lebanon and Qatar,” stressing “the continuous work to activate them at all levels.”#Council of Ministers pic.twitter.com/Xk6Clh5Rmu

Mikati stressed “the strength of relations between Lebanon and Qatar,” and the “continuous work to activate them at all levels,” according to the official Lebanese News Agency.

He pointed out that “the new Qatari support for the army, in parallel with the periodic aid to all the military and security forces, is the subject of comprehensive appreciation by all the Lebanese and helps Lebanon to overcome the difficult stage and maintain stability in it.”

For his part, the Qatari Foreign Minister reiterated that the announcement of this contribution “comes within the framework of the State of Qatar’s firm commitment to support the Lebanese Republic and stand by the brotherly Lebanese people, in addition to its firm belief in the importance and necessity of joint Arab action.”

In July of last year, the State of Qatar announced that it would support the Lebanese army with 70 tons of food per month for a year.

Sudan.. New demonstrations in Khartoum and the high death toll of “one million” June 30, and the police present their version | Politics news