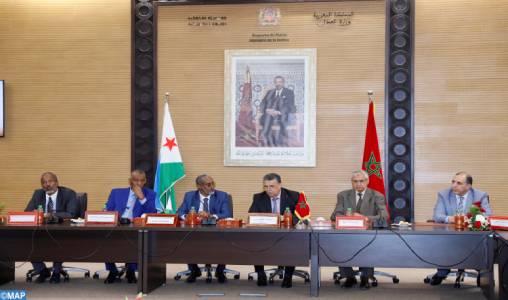 Rabat – The Minister of Justice, Abdellatif Ouahbi had, on Thursday in Rabat, talks with his Djiboutian counterpart, Ali Hassan Bahdon, focused on cooperation mechanisms in the field of justice, through the pursuit of exchange of experiences and expertise and skills development.

This meeting crowns a series of visits made by the Djiboutian minister, who is leading a large delegation, in particular to the High Council of the Judiciary, the Presidency of the Public Prosecutor’s Office and the Higher Institute of the Judiciary, and talks with the General delegate for prison administration and reintegration and coordinator of the Mohammed VI Foundation for the reintegration of detainees, with a view to capitalizing on the experience of the Moroccan justice system.

These visits and meetings allowed a joint and global assessment of the results of cooperation in the field of justice, while exploring the prospects for the future.

In this regard, it was agreed to institutionalize administrative and technical cooperation between the Ministries of Justice of the two countries, through the elaboration, as soon as possible, of a draft agreement (protocol or memorandum of agreement) and its implementation on the basis of a very specific annual action plan.

Similarly, the two parties have decided to promote the exchange of expertise in the training of executives and legal and justice professionals, financial and administrative management, digitalization and modernization of the judicial system, and exchange of legislation, documents and legal and judicial data.

They are committed to exchanging visits in order to take advantage of the partnerships and activities linking the two ministries to other parties.

In a statement to M24, MAP’s continuous news channel, Mr. Ouahbi highlighted the work carried out with his Djiboutian counterpart in the field of training magistrates and justice professionals, assuring that this work will be crowned, in three months, by the signing of several cooperation agreements.

For his part, Mr. Bahdon described his visit to the Kingdom as “excellent”, due to the quality of the exchanges with several Moroccan officials and the visits made to the various judicial institutions.

This working visit to the Kingdom allowed the Djiboutian delegation to have an exhaustive vision of the Moroccan judicial system, able to take advantage of it for the improvement of the justice system in Djibouti, he said.

Zelensky accuses Russia of ‘deportation’, ‘mass killing of civilians’ and ‘genocide’ in Donbass