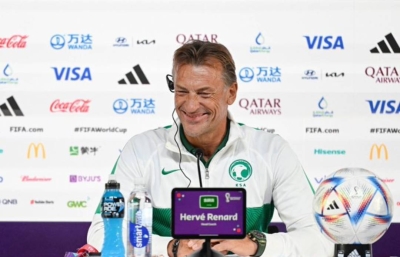 Al Marsad Sports: French coach Hervé Renard, coach of the Saudi national team, revealed that the match against Poland tomorrow in the second round of the World Cup will be more difficult than facing Argentina.

Speaking at the match press conference, Renard said: Poland’s match will be more difficult than Argentina

He continued: We respect all the teams we face, whether Argentina, Poland, Vietnam or other teams.

And he talked about his mother, saying: My mother is watching the World Cup, she was happy from the victory and I was proud of that, and tomorrow’s match will be more difficult for her.

When asked about one of the coaches, Renard replied, “I do not give advice to other coaches, and I am a modest coach.”

He continued: My wife and her family are from Poland, but tomorrow she will wear the Saudi national team shirt.

And in response to the players receiving huge rewards after the victory over Argentina, he said: It is not true, and we have a good football federation, as well as the Ministry of Sports, which works with us in a wonderful and serious manner. Currently, we won in only one match.

What if your back is stiff when you wake up in the morning? Ankylosing spondylitis should be suspected…