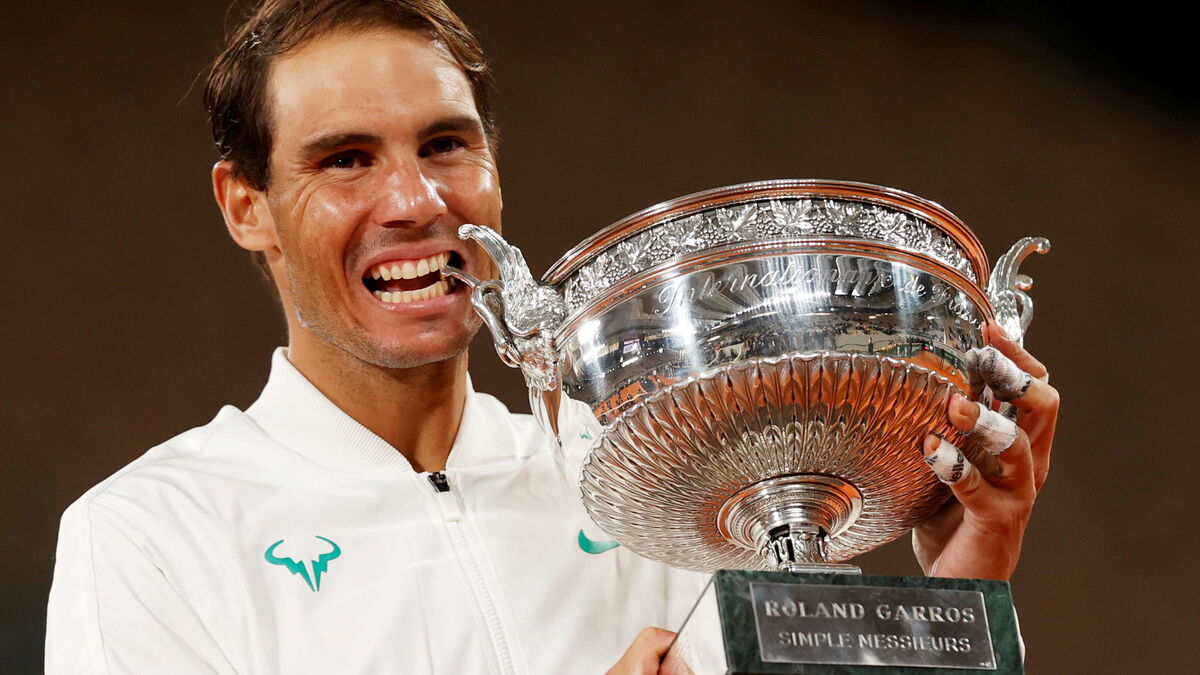 It is made of an ocher metal that has defied the laws of earthly attraction for sixteen years. Unbreakable. Unalterable. Stainless like the steel of the statue, three meters high and almost five wide, which now freezes it in action in the immortality of the Roland-Garros stadium. The Parisian Grand Slam begins this Sunday and Rafael Nadal, 35 next Thursday, is looking for a 14th title.

“What he did here is for me the greatest achievement in the history of sport,” slips tournament director Guy Forget, admiringly. Already alone on earth, the Spaniard can even become alone in the world by lifting a 21st major trophy that would relegate Federer to the second row of the history books. Every year, we watch for the grain of sand, the pebble in the shoe adorned with horns. And almost every time (13 out of 15), the Mallorcan reduces doubts to dust to spread out at full length, arms outstretched, on his promised land in the Central.

This time, however, the orange alert did not go far. With two points (one match point for Tsitsipas in the Barcelona final and two for Shapovalov in 8th in Rome), it would be a state of emergency. “He won a minor tournament, Barcelona, ​​and finally Rome. It must be said clearly that the other players have caught up a little, or vice versa. Nadal will be 35 years old at the beginning of June, tackling the always provocative Boris Becker. There is no tournament more physically demanding than Roland Garros. This is perhaps a first signal with a slower Nadal who is getting tired a little faster than before. “

The former coach of Djokovic undoubtedly puts the plow before the bull. “They (Editor’s note: Nadal and Djokovic) have less margin, they are more and more hooked by increasingly different players, observes Gilles Simon. They have fewer and fewer quiet matches, but it’s holding up! This is where you see they are strong. “Same sound from Marcha Real on the side of Jo-Wilfried Tsonga, who knows his little Rafa well illustrated. “Ask all the players, even those who are able to beat him today, they think he is the favorite, blows the semi-finalist of the 2013 and 2015 editions. There is no doubt, he won thirteen times in fifteen years, it’s just out of the ordinary. If there is one favorite, it’s him! “

Is. Since his elimination by Djokovic in the 2015 Roland Garros quarter-finals (his last loss in Paris), eight players have managed to trip Manacorí on his favorite surface: Djokovic, Thiem, Tsitsipas, Zverev, Rublev, Schwartzman, Fognini and Cuevas. Even if Rublev, programmed to play Nadal in the quarterfinals, can create a surprise with his maximum risk-taking, it is surely on the side of the first four that it is necessary to look for the one who can succeed him on the prize list.

Winner in 2015, Novak Djokovic should cross paths with the extraterrestrial in the semifinals. A good point for the world No. 1, who knows how the weight of a final against the master of the place can be overwhelming. Six months ago, the Serbian had been scattered like a puzzle (6-0, 6-2, 7-5). It’s up to him to pick up the pieces. Behind, with the ardor of his twenty-two years, Stefanos Tsitsipas, semi-finalist in 2020, is the heir.

The Greek, n ​​° 1 in the Race, won Monte-Carlo and Lyon and made Nadal falter in the Barcelona final. Alexander Zverev, he offered the Iberian quarterfinals in Madrid before winning the tournament. But in conditions quite different from Paris, with the specificity of a Masters 1000 at altitude. Dominic Thiem remains. Mentally worn out since the quest for the US Open 2020, the Austrian, double finalist Porte d’Auteuil, struggles to go up the slope.

Tsitsipas, Zverev and Thiem start their fortnight this Sunday. With the happy prospect of not meeting Nadal (or Djokovic) before the outcome of June 13. Roger Federer, he does not see so far. For what looks like a farewell tour, the Swiss, 40 in August, has no other ambition than to line up sets to prepare for his precious grass season and dream of Olympic gold. Still world No. 8 despite more than a year of eclipse by the grace of the freezing of the ATP ranking, the Bâlois has only played one match in almost three months. Her female alter ego Serena Williams, 39, has been running for four years after an elusive 24th Grand Slam that Bartys, Swiatek, or even Sabalenka are not at all prepared to offer her …