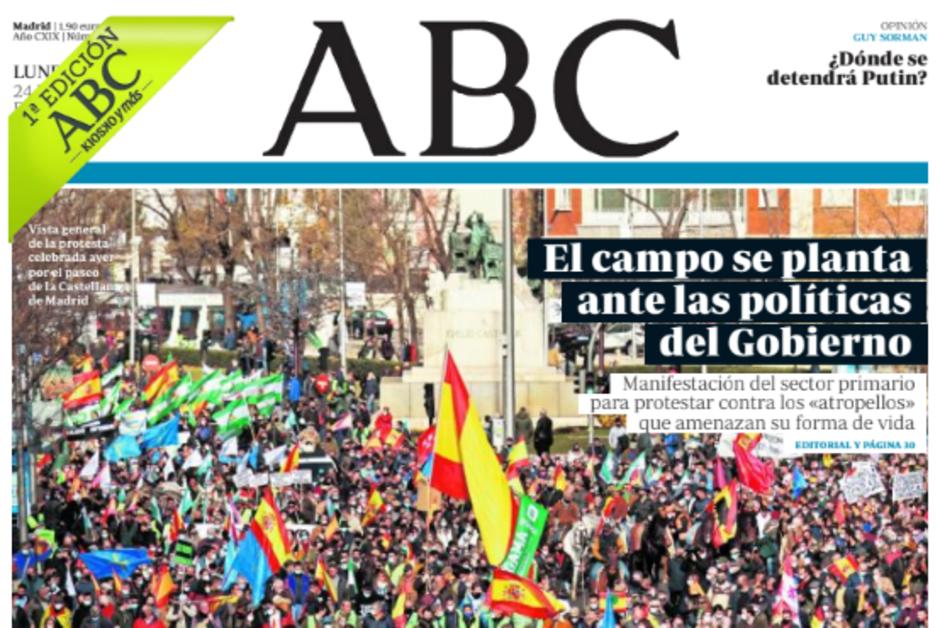 Thousands of people marched on Sunday January 23 in Madrid to demand measures in favor of farmers, fishermen and breeders. The context is tense since the Minister of Consumption, Alberto Garzón, made remarks against overconsumption of meat and intensive livestock farms.

The Spanish countryside is angry. From “thousands” of people demonstrated on Sunday January 23 in the streets of Madrid to express the fed up of the campaigns. “Rural Spain has had enough”, writes the conservative daily ABC, and she asks the left-wing coalition government to end “to the erosion it causes in the Spanish countryside”.

At the call of the organization Alma Rural (for the development and defense of the rural world), farmers, fishermen and breeders “came from all over Spain”, confirmed The country, listed center left. The Madrid daily also noted the presence of several members of the main opposition parties in the procession, linked to Vox (far right), the Popular Party (right) and Ciudadanos (center right).

Jumble, The country lists the main demands of the demonstrators, namely the defense of the primary sector as“profitable and sustainable activity” in order to curb the rural exodus which has affected the Spanish countryside for decades, but also the desire to suppress “laws that make ‘obstacle’ to the development and maintenance of a key sector of the economy”.

Among these “obstacles”, among other things, a law that prohibits the hunting of wolves and is considered incompatible with the promotion of extensive breeding by the government, or the adoption of a recent law on animal welfare, which would have been done “behind the backs of breeders and the rural world”.

The primary sector in an “unsustainable situation”

Protesters are also targeting Brussels, accused of being “rigorous when it comes to imposing production conditions on farmers and breeders in the European Union”, but which, in parallel and for other interests, opens the European borders “to imports without having the same requirements in terms of quality, food safety or animal welfare”.

According to the conservative newspaper The world, the Spanish rural world is right to be angry. The “unsustainable situation” he is facing is aggravated “by the pressing problem of the cost of raw materials – the price of fertilizers has increased by 300%, electricity by 270%, diesel by 73% and animal feed by 23%”.

In the background, the procession had in its sights the Minister of Consumer Affairs, Alberto Garzón. Affiliated with the Izquierda Unida formation (a gathering of left-wing parties), he has unleashed passions since he invited his compatriots to eat less meat and criticized the giant intensive livestock farms.

The rural world will be one of the themes of the next regional elections in Castile and Leon, on February 13, concludes The world.

Conservative daily since its creation in 1903, ABC changed many times. Within the Spanish press, he now stands out for his unusual front pages, characterized by a single photo that takes

In Caen, the counterfeiters of a priceless ancient currency unmasked