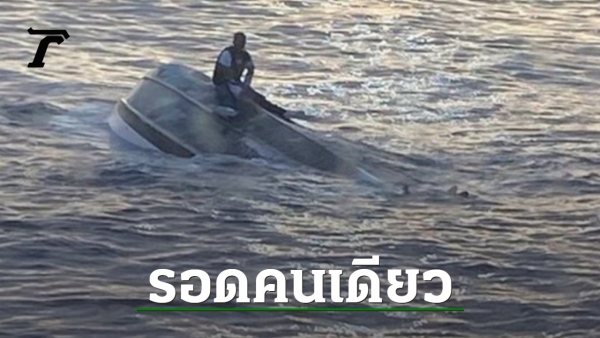 On 28 Jan. 65 BBCReport Image of a young refugee sitting alone on a boat who suffered a capsize in the middle of the sea off the coast of Florida in the United States On Sunday, January 23, it became a sad picture reflecting the plight of refugees who risked their lives. and may be a victim of human trafficking gangs Crowded on boats hoping for asylum in developed countries, Europe and the United States.

According to the BBC, the young man, 22-year-old Juan Estiban Montoya, is from Colombia. And he is the sole survivor of the ship capsized at sea. While 39 people along the way were missing, one of them was his sister Maria Camilla.

US Coast Guard has helped Mr. Montoya After a merchant ship saw him sitting alone on a boat rising above the sea, about 72 kilometers offshore from Fort Pierce, Florida, it was rushed to the Coast Guard.

Then US Coast Guard officials conducted a search for the missing person. Only five bodies were recovered from the sea, before ending a sea search that encompassed a vast territory the size of New Jersey. On Thursday 28 Jan.

A U.S. Coast Guard official said the ship may have belonged to a human-trafficking gang. Of the 40 passengers on board, none of them wore life jackets.

Mr Montoya, after receiving help Has revealed to US officials that passengers on the boat, including him, arrived from the coast of Bimini. of the Bahamas Islands At midnight on Saturday, Jan. 22, and after about four hours the ship was facing bad weather. causing the ship to capsize Mr Montoya also saw about 20 refugees trying to hold onto the wreck. for hours before exhaustion and finally got lost in the sea.

Survivor of shipwreck in Florida is Colombian