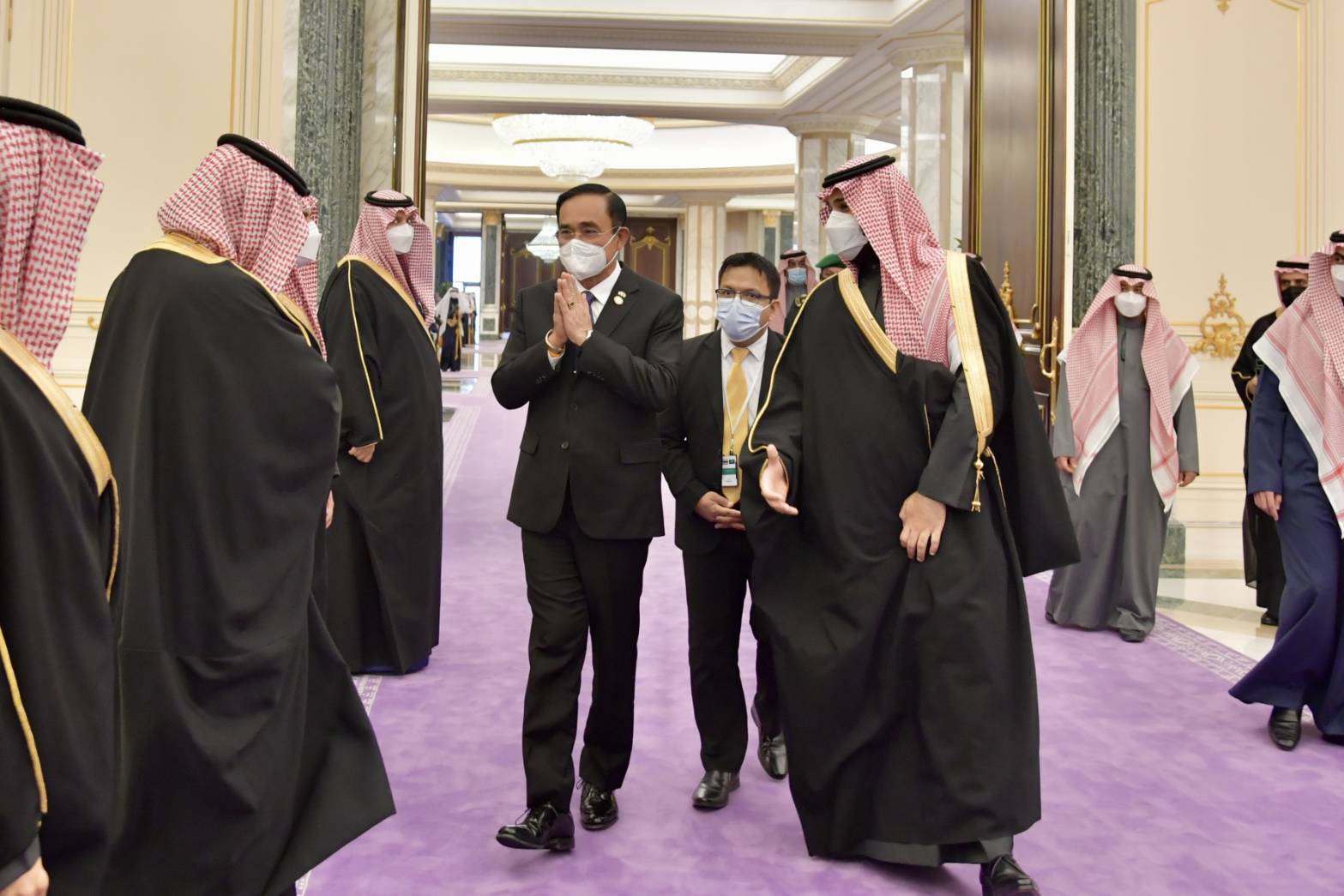 27 Jan. 2022 – Mr. Takekin Somsap, former president of the Thai Radio and Television Journalists Association, posted a picture of Gen. Prayut Chan-o-cha, Prime Minister, to visit Saudi Arabia. with the message that A friend of Suankularb Model 97 asked …why did Saudi Arabia use a “purple carpet” to welcome Gen Prayut? Chan-o-cha…I tried to find the answer roughly, which is

1. Originally, the red carpet was the carpet of honor, the beauty and splendor that Saudi Arabia used to decorate its VIP guests.

2. Although the red carpet has been in use for a long time, it began to be widely used in the 19th century in the United States and Europe and spread throughout the world. including in Saudi Arabia ..It is recorded that in 1821 the people of Georgetown South Carolina lays a red carpet to welcome President James Morro

3. Around the 1920s, red carpets made their way into Hollywood with the release of Douglas Fairbang’s Robin Hood…

5. Until the last two years The Oscars switched to “pink carpet” instead of the red carpet.

6. It is said that the “red carpet” is a symbol of grandeur and grandeur. It’s about to wilt because I’ve started using other colors to replace…(the red carpet should be used until the magic no more VIP color)

7. Just this year Saudi Arabia The Ministry of Culture has announced the use of “purple carpets” instead of “red carpets” in both royal ceremonies and receptions for city guests from the airport.

8. The reason is that in the spring of Saudi Arabia, “purple” flowers bloom like a purple carpet all over the land, such as lavender flowers, desert germander, basil and Jacaranda trees. .Purple is used instead of red.

9. Lavender is a flower that is used in the daily life of the Saudis for food, decoration and cosmetics.

11. Plus, the purple carpet fringe, with its beautiful hand-woven pattern, is a Saudi World Heritage-listed artwork. which is traditionally made from Bedouin handicrafts

12. And the use of purple carpets is also part of Vision 2030 that will bring Saudi Arabia forward..

13. This may be one reason Saudi Arabia goes beyond the past to the future to restore ties with the Kingdom of Thailand.

North Korea has fired six weapons tests in less than a month.