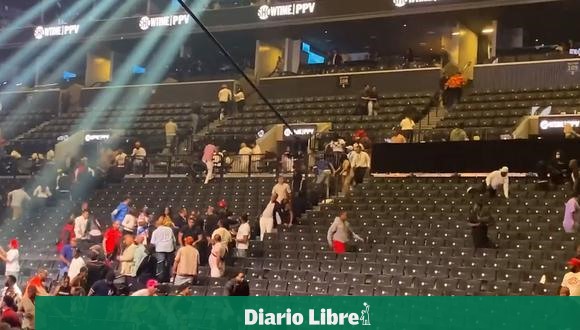 Several people were injured last morning in a New York stadium when panic broke out when several people mistook noises for gunshots and caused a stampede.

The event reflected the nervousness that exists in the United States after the recent shootings at a school in Uvalde (Texas) and in a supermarket in Buffalo (New York), as well as several violent incidents with great repercussion in the New York subway.

The events took place at the end of a boxing match between Gervonta Davis and Rolando Romero at the Barclays Centerthe court where the Brooklyn Nets of the NBA usually play their games, which was already emptying after the fight.

A dozen people were slightly injured and were treated in hospitals in the area after several noises were mistaken for gunshots causing part of the public to flee running to try to be safe.

Among those attending the event was the Japanese tennis player Naomi Osaka, who via Twitter explained that she heard screaming and saw people running and talking about there being a shooter in the stadium, which left her “petrified”.

The New York Police Department (NYPD), after investigating what happened, confirmed that there was no shot and that the entire episode was the result of a confusion that sparked panic.