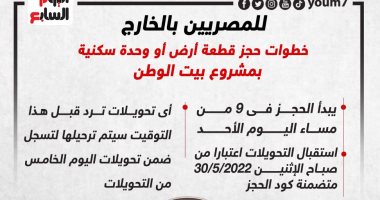 If you are an Egyptian abroad and want to book an apartment or a plot of land.. In this report, we will explain to you, through specific steps, how to book and the most prominent conditions.

2- The eighth phase of the Beit Al Watan project includes offering lands and units in distinctive locations in the new cities.

3- Transfers will be received as of tomorrow morning, Monday 30/5/2022, including the reservation code.

4- Any transfers received before this time will be transferred to be recorded within the transfers of the fifth day of transfers.

6- During the login process, please make sure that the password is written correctly, because if it is typed incorrectly 3 times, the site will close the account.

8- For plots of mixed activity that were offered in the new city of Damietta.

9- As for the cemetery lands, they were introduced in 4 new cities (New Cairo – Badr – Tenth of Ramadan – New October).

10- As for the villas, they were put up in the new administrative capital “Al-Maqsad”, and the new city of Mansoura.

– The third residential district “R3” in the New Administrative Capital)

12- The price of a square meter is determined in Egyptian pounds, provided that payment is made in foreign currency (dollars), and the price of the dollar is fixed according to the exchange rate on the day of the start of the reservation.

13- Reservation and payment are made by bank transfer from abroad in dollars or from within, provided that the currency is available in bank accounts 60 days before the start of the reservation.

14- It is prohibited to deposit cash in dollars in accordance with the instructions of the Central Bank of Egypt.

15- Transfers are opened for a period of 3 weeks from the date of opening the reservation door, and it is not allowed to benefit from any excess amounts from previous confirmed reservations in the previous stages.

18- The amount will be added with priority transfer of $1,000 or completion.

19- It will not be allowed to transfer the transferred amounts from one of the barriers to another barrier, or to include amounts in excess of the advance payment from a transfer to be included in another transfer, whether to the barrier itself or to a third party.

20- The incoming transfers are recorded before the transfers are opened at this stage within the fifth day transfers, with no modification to any reservation confirmed on the website.

21- The possibility of modifying the desire will be allowed after completing the registration of all stage transfers for those for whom the reservation has not been confirmed.

22- A deadline will be given to receive the desire modification on the website’s mail for a period of 4 days from the end of the registration of all transfers.

23- The requests will be registered according to the priority of the bank transfer contained in the statements of the Central Bank of Egypt.

Gelato, the passion that became a way of life for Sebastián Demarchi