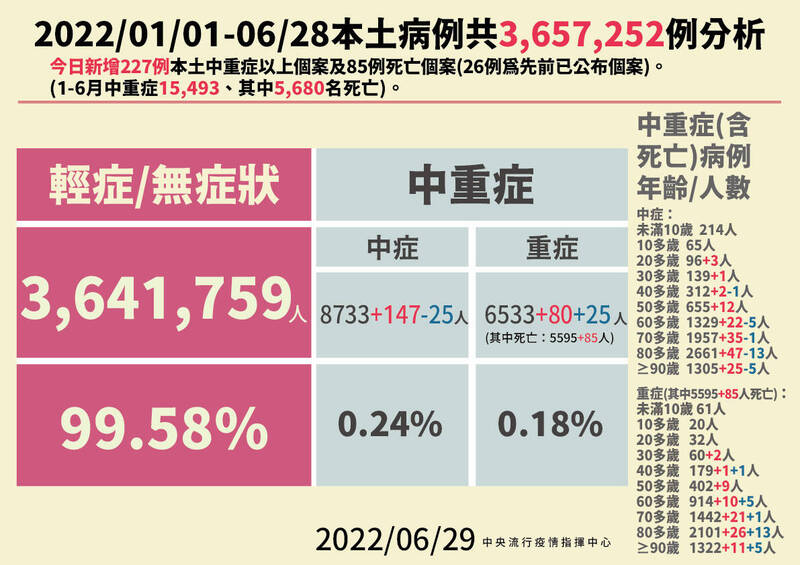 The Central Epidemic Command Center announced today that there were 227 more severe cases of Wuhan pneumonia, including 147 moderate and 80 severe cases. (provided by the command center)

[Reporter Lin Huiqin/Taipei Report]The Central Epidemic Command Center announced today that there were 227 new cases of Wuhan pneumonia (new coronavirus disease, COVID-19) in severe cases, including 147 cases in moderate cases and 80 cases in severe cases. As for the 85 new deaths, the lowest since May 26, the youngest deaths were 2 30-year-old men.

Luo Yijun, deputy head of the medical response team of the command center, said that there were 85 new deaths from local cases, including 46 males and 39 females, aged between their 30s and 90s, all of them were severe infections and 81 had chronic diseases history, and 53 patients who were not vaccinated against 3 doses of COVID-19. The date of diagnosis was between May 24 and June 26 this year, and the date of death was between May 27 and June 26.

The youngest deaths were 2 30-year-old males with a history of cancer. One of them was diagnosed on June 14, with cough and runny nose. He died on the 26th. The cause of death was pneumonia, respiratory failure, and cancer metastasis. It was confirmed on June 25 during hospitalization for cancer, and he died the next day. The cause of death was cancer and the new crown diagnosis.

There were 85 new deaths, the lowest since May 26. Among them, the youngest deaths were 2 30-year-old men. (provided by the command center)

TJ Jackson: You definitely make the best fries in the world!