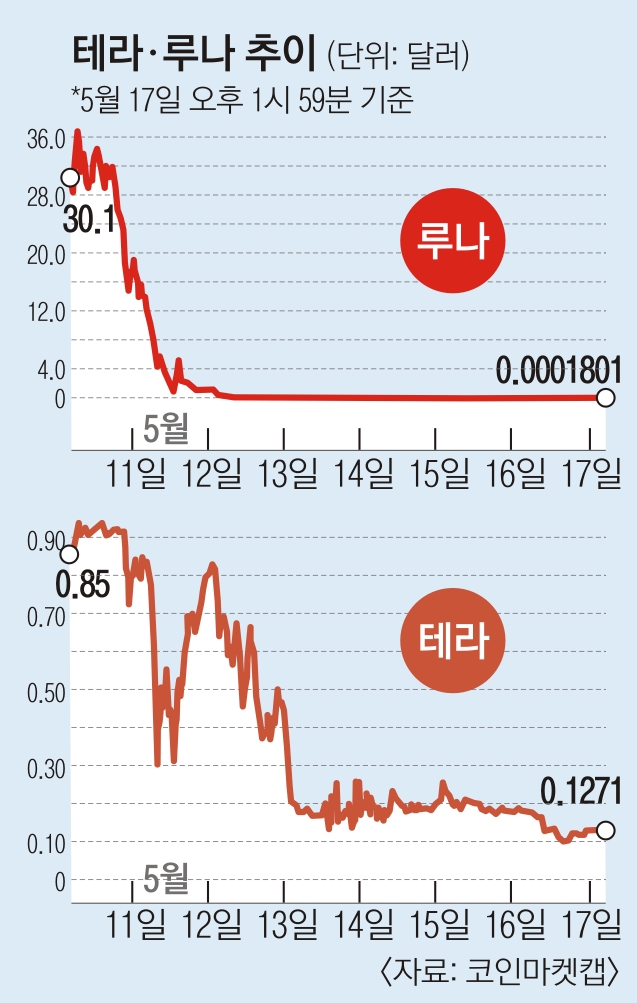 While the entire virtual asset (cryptocurrency) market is faltering in the aftermath of the ‘Terra/Luna shock’, CEO Kwon Do-hyung of Terraform Labs, which issued Terra and Luna, recently announced a plan to reorganize the ‘Tera ecosystem’. It seems that the controversy is not going away. At a time when the US financial authorities are also stressing the need for regulation on cryptocurrencies, the domestic financial authorities are also watching the situation.

CEO Kwon said on Twitter on the 16th and 17th, “The Terra ecosystem and its community are worth preserving.” ” he said. Experts and others are looking coldly at Kwon’s proposal. Changpeng Zhao, CEO of Binance, the world’s largest cryptocurrency exchange, said, “(The new plan) is only a hopeful idea and does not create any value.” Dogecoin co-founder Billy Marcus said, “Don’t bring in new victims, leave.”

Due to the Terra-Luna shock, the cryptocurrency market continues to be bearish. According to CoinMarketCap on the same day, Bitcoin, the world’s largest cryptocurrency, which fell to the $26,000 level (about 33 million won) after the collapse of Terra, recovered to the $30,000 level, but showed no sign of a rebound. Tether, a representative stablecoin, has also been sideways below $1 for several days.

While financial authorities such as the U.S. Securities and Exchange Commission (SEC) and the Treasury Department made a move to strengthen regulations by mentioning the risks of cryptocurrency on the 16th (local time), Financial Supervisory Service Commissioner Jeong Eun-bo held an executive meeting on the 17th in regards to the Terra-Luna shock, saying, We are concerned about the deterioration of asset reliability and possible damage to users.” Koh Seung-beom, chairman of the Financial Services Commission, who attended the National Assembly’s Political Affairs Committee on the same day, said, “As of recent years, there are 280,000 Luna users, and it is estimated that they have 70 billion.” We will make sure that measures to prevent it can be faithfully reflected.” Financial authorities also faced criticism for belatedly conducting an emergency inspection by requesting related data from a domestic cryptocurrency exchange last week when the Terra-Luna shock occurred.