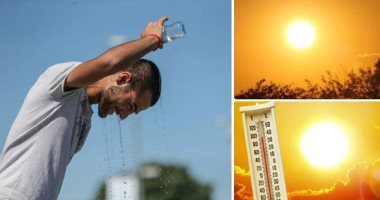 The Meteorological Authority revealed a case the weather Expected from today, Saturday, until next Thursday, as the country will witness hot weather during the day on Greater Cairo, Lower Egypt, South Sinai and North Upper Egypt, tending to heat on the northwestern coasts, moderate on the eastern coasts, very hot on southern Upper Egypt, tending to cold in the night and early morning. On the north of the country up to Greater Cairo, gentle on the north of Upper Egypt and South Sinai moderate on the south of Upper Egypt.

And “The Seventh Day” publishes the details of the weather during this period, as follows:

From Saturday to Monday, a heat wave in all parts of the country reaches its peak on Sunday, with very hot weather during the day, moderate at night.

Wind activity in areas of Greater Cairo, Lower Egypt, and the northern coasts that are exciting for sand and dust in the far west of the country at intermittent intervals.

Wind activity on areas of the northeastern coast at intermittent periods.

As of Tuesday, temperatures will drop in all parts of the country, so that spring weather tends to be hot during the day and cold at night.

Wind activity on areas of the northern coasts, southern Sinai, and the south of the country at intermittent periods.

Russia puts Johnson on the banned list, and reveals the motives for the decision

The cover of the PERFIL Journal for Saturday, April 16, 2022