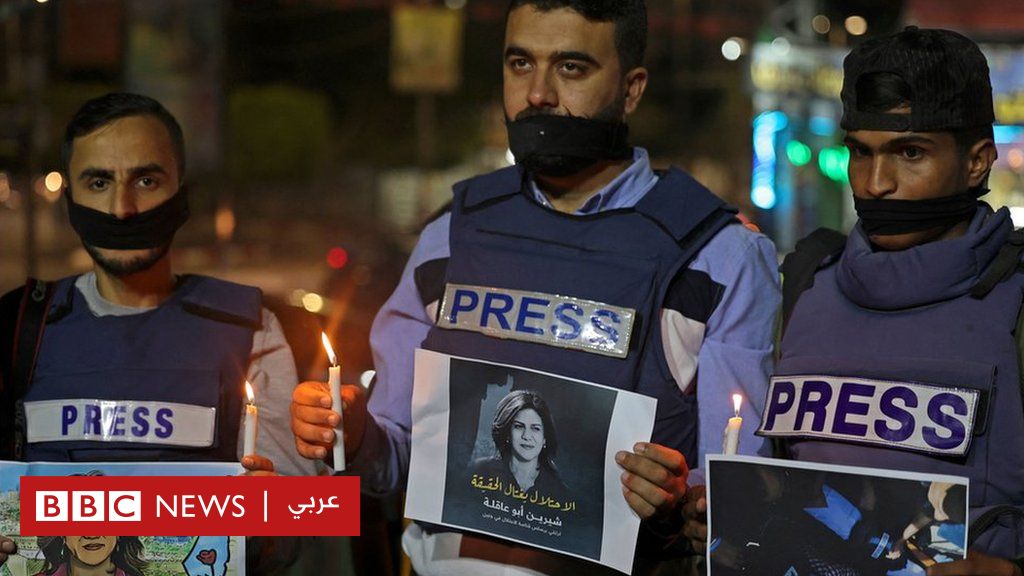 For the second day in a row, social networking sites in the Arab world are witnessing angry reactions to the killing of the Palestinian journalist for Al-Jazeera, Sherine Abu Akleh.

Many Arab celebrities expressed their sadness and affection for the journalist’s killing on social media platforms.

The Lebanese singer, Nancy Ajram, said: “Sherine Abu Aqleh is a martyr of the press, the nation and the cause.”

And the Iraqi artist, Alaa Hussein, said on Instagram: “Shocking news, the martyrdom of the struggling journalist Sherine Abu Aqleh, with Israeli bullets.

For her part, the Syrian artist, Asala Nasri, commented: “What is a testimony greater than this testimony… the wounded daughter of Palestine will be in heaven, God willing… She believed in her homeland and her work and pushed her soul to yearn for the truth… Every Arab house prays to you for mercy, heroine from the homeland of heroes.”

The Algerian sports commentator Hafeez Al-Daraji also mourned the Palestinian journalist, through his official account on Twitter, by saying: “They assassinated a witness to their heinous crimes. He died without his homeland, he died a martyr, but he who lived without his honor and honor has lived dead, humiliated, traitor, and cowardly.”

In turn, the Egyptian journalist Amr Adib commented on the news of the killing of Sherine Abu Aqleh, saying: “May God have mercy on Sherine Abu Aqleh. She was the best reporter in the Arab world, who paid the price for her profession, her nationality, and her painful Palestinian and Arab reality. For the millionth time, the world watches the Israeli truth without beautification or slogans…”.

Among the Arab celebrities who mourned the late Emirati artist Ahlam, as well as the Palestinian artist Mohammed Assaf.

Assaf said: “The journalist Sherine Abu Aqleh joins the convoy of martyrs. We knew her as a brave journalist with a free and strong voice. All my condolences to her family, the journalist family and all the Palestinian people. Our path to freedom is full of sacrifices and blood, but we will inevitably reach.”

And the Emirati artist, Ahlam, posted on her official page on Twitter, a picture of the reporter and commented: “Sherine Abu Akleh, may God have mercy on you, O Voice of Palestine, and you will remain in memory, O free daughter of Palestine.”

Jordanian artist Munther Rayhana mourned Sherine via “Instagram”, and said: “To the gardens of the mole, dear friend, thank you for this white march, thank you for every word of truth that reached us, the truth is that you did not leave.”

Al-Jazeera Media Network said in a statement that “its reporter in the occupied West Bank, Shireen Abu Aqleh, was shot dead by the Israeli army in Jenin camp,” while Israeli sources said that “the reporter was killed as a result of indiscriminate shooting by Palestinian gunmen.”

The Palestinian Ministry of Health stated that Abu Aqila “died of serious injuries she sustained in the head area while covering the Israeli forces’ storming of Jenin camp on Wednesday morning.”

Al-Jazeera network accused the Israeli soldiers of targeting its correspondent “directly”. It quoted eyewitnesses as saying that “a sniper targeted Shireen with a bullet in the face, even though she was wearing a jacket and helmet bearing the logo of the press.”

This is how you can get rid of headaches without medication

A journalist blows up a surprise.. Abu Hashima’s friend is a foreigner, and this is her picture