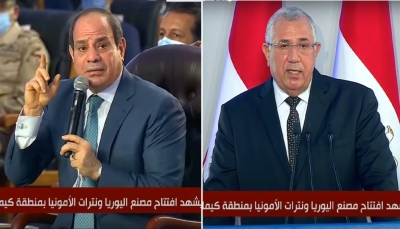 Al-Marsad newspaper: Egyptian President Abdel-Fattah El-Sisi interrupted the Minister of Agriculture, Mr. Al-Qusair, during his speech due to the prices of meat in the country.

Al-Sisi told the Minister of Agriculture during the inauguration of a number of projects: “They say that meat is still expensive… so we want them to understand that these measures, if they were not used during the past few years, where would we have stayed?”

The Minister of Agriculture responded, saying: “We have all noticed global conditions and the rise in global prices in feed and its components and feed additives, and the high cost of shipping, transport, insurance, etc., but the Egyptian state, through the national program for veal and maximizing the breeding program and the muon head project… all of this led to the provision of a large amount of livestock needs.

He continued, “The rise in prices since about 2020 or before the Ukrainian crisis, the prices of corn were about 3 thousand, but now it reaches 8 or more… and other products whose prices have increased.”

These shoes are always a good idea. One track: Ballet

President El-Sisi: The state postponed the increase in electricity prices to relieve citizens