With the recently released update for the PlayStation 5 Sony has enabled the option of installing a memory expansion via M.2 SSD. I have now done that myself with my console and would like to briefly say a few words about it.

Sony has certain requirements for the M.2 SSD. So you cannot install just any SSD, according to Sony it should be at least a PCI Express Gen4x4 model. If you look around on YouTube, you will also find various tests that come to the conclusion that other variants are also possible, but I have bought an officially supported SSD from Western Digital in the size of 1 TB – between 250 GB and 4 TB supported by the PS5. 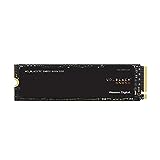 You are variable in length, you can use 30, 40, 60, 80 or 110 mm long models, but none of them must be wider than 2.5 mm and thicker than 11.25 mm. No SSD is that thick anyway? Right, but Sony recommends the use of a heat sink / heat sink, which is currently very difficult to get. Here, too, there are tests that show that it can also be done without a heat sink, but because of the service life, I would personally follow the recommendation. My choice fell on a one-sided model from Icy Box.

Now we come to the installation, which is relatively easy to do. But you have to get the console open first. Place the PS5 with the Blu-Ray drive in front of you at the bottom left – switched off of course. Now you take hold of the upper right corner and push something down, at the same time you lift the lower left corner of the drive slightly. The console cover pops off. Dbrand explains the whole thing in his installation video for the dark plates:

Once you have opened the device, you can already see the lid of the SSD slot. You unscrew this with a Phillips screwdriver and remove the cover. You will now find the slot with a screwed in screw and a washer. Unscrew the screw (spacer) on the right and place the spacer disc in the opening that corresponds to the length of your SSD. If you bought a standard SSD, it should be 80 mm long. Now you install the heat sink, usually adhesive thermal pads are included, which you stick to the heat sink and then in turn glue the heat sink to the SSD. In my case there were two more rubbers to attach the body to the SSD. Depending on what kind of heatsink you bought, you may have to screw it together.

Once that’s done, click the SSD into the port, the card should then stick out at an angle. Now carefully push the SSD down and turn the screw into place in the spacer. Install the cover and put the cover back on and screw it tight. Complete. Now you plug the cables back into the PlayStation and starts the console. Immediately after the start, the PlayStation 5 will inform you that the M.2 SSD must be formatted. You can do that at the touch of a button. Now a speed test follows, and I got a read speed of 6.8 GB / s. But that can vary even with an identical SSD. The only important thing is that you have to come over 5.5 GB / s.

Once you have arrived at the system’s home screen, you can go to Settings> Storage> Installation location and specify whether PS5 and PS4 games should in future end up as standard on the M.2 SSD or in the console memory. You can also move games from the console memory to the SSD in the games library. That was it already.

Affiliate links are included in this article. Clicking on it will take you directly to the provider. Should you decide to buy there, we will receive a small commission. Nothing changes in the price for you. Thank you for your support!