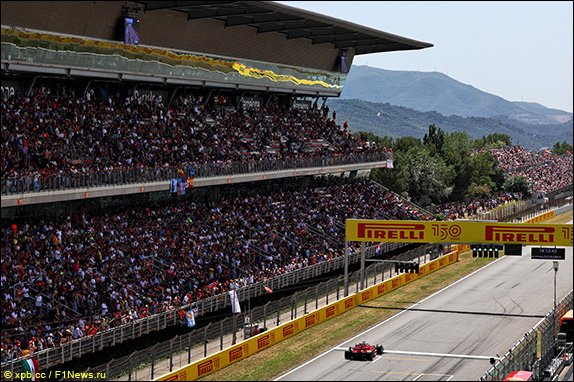 All teams except Haas F1 have prepared major updates for the Spanish Grand Prix – and in the first session focused on evaluating their effectiveness. cars drove out with aerodynamic paint and pressure gauges.

At Formula 3, Formula 2 and W Series training, the asphalt was covered with used rubber, the grip was good, the weather was favorable. The stands were already full on Friday – in Spain they missed Formula 1.

For the first time this season, temporary substitutions took place in three teams at once. Formula E champion Nick de Vries took the wheel of Alex Albon’s car at Williams, Youri Vips replaced Sergio Perez at Red Bull Racing, and Robert Kubica replaced Guanyu Zhou at Alfa Romeo. In the second session, the main pilots will return to the wheel.

Vettel, Bottas and Magnussen returned to the pits after the first laps and handed over the car to the mechanics, but then left again. Esteban Ocon complained of steering problems, breaking a series of laps and wasting ten minutes. DRS was not working correctly on Hamilton’s car.

Charles Leclerc took the lead with a lap time of 1:19.828. To the delight of the fans, both Spanish riders finished the session in the top five.

Results of the first session

Thanks to an implant, they identify a migrant who died after crossing the border