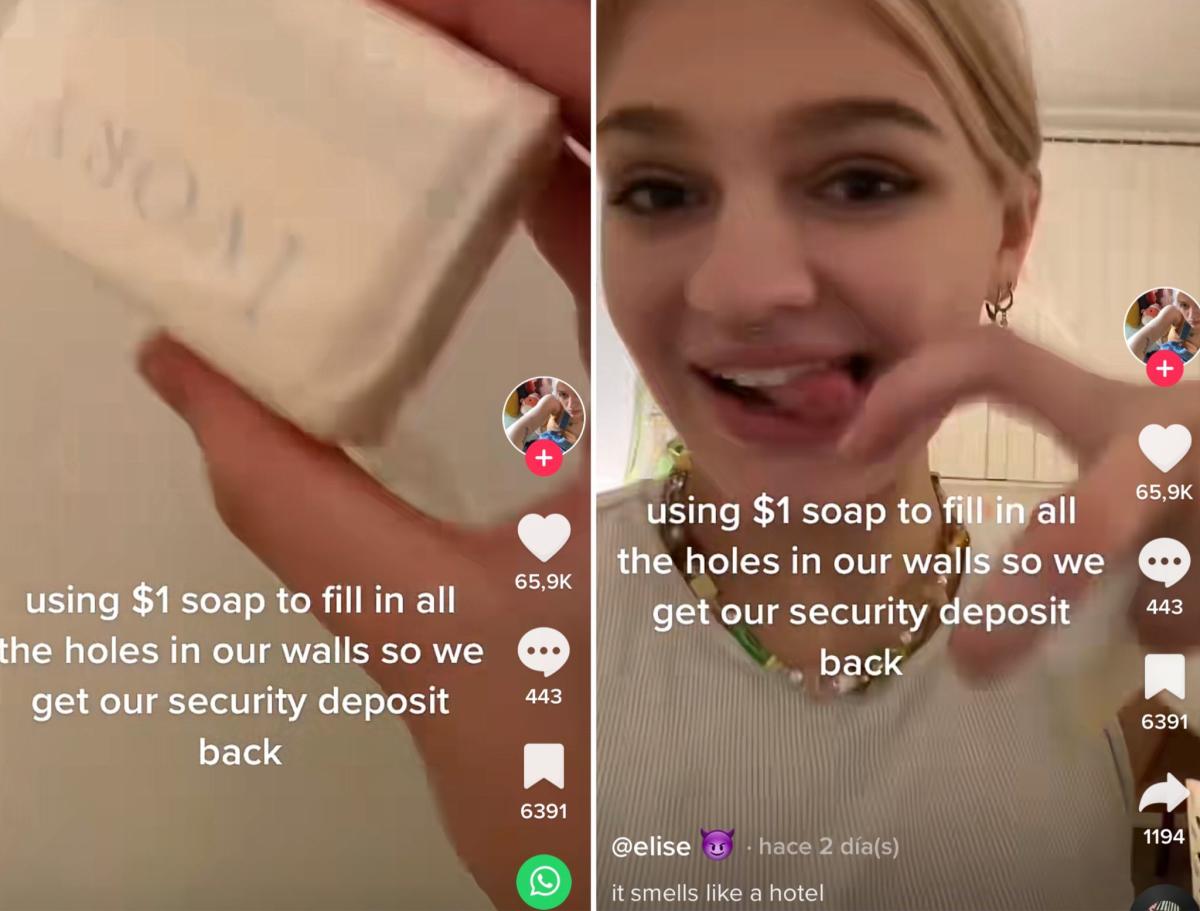 The growing rental crisis in the United States spares nothing and no one. Renters from all cities and income levels are struggling to find new homes or afford the ones they already occupy, and of course, save as much money as possible in the process.

Elise is clear. At just 19 years old, she has already managed to become independent in a rental apartment and, most surprisingly, she knows an easy trick that will help her move without losing the deposit that she gave to her landlord. Best of all, she says the apartment now smells “like a hotel.”

In a video Going viral this week on TikTok, Elise (@oprahsharvestday) shows how to use $1 soap to fill in holes in your wall and save the money of caulking, smoothing, and repainting them.

As of Wednesday, his TikTok received around 900,000 views on the platform. In the more than 400 comments it received, viewers responded with a variety of reactions to this highly unconventional stunt.

One person said they did the same thing, but with ranch sauce, while others named alternatives like toothpaste, nail polish, duct tape, chalk, playdough, and bits of toilet paper.

Many were surprised, but some already knew the soap trick and claim that “it does the job well”.

“Wait so am I the only one applying caulk and paint?” one user wrote. “It’s what the landlord deserves,” replied another. “I put putty, but I don’t paint. They will still end up painting the walls again,” they added.

The video also received criticism. Some viewers said the offbeat options weren’t worth it, claiming that many budget stores like Dollar Tree sell putty.

“Please, guys… Wall padding is also in the Dollar Tree”; “Just use putty…it’s super cheap, it’s made for this, and it works better”; “Homeowners should use these comments as justification to fill them out themselves and save their walls,” they wrote.

US rental costs rose at the fastest pace in more than three decades, topping an average of $2,000 a month for the first time, reported Bloomberg In the past week.

Rent has even risen above pre-pandemic levels in most major cities, and prices are particularly steep in metro areas that saw a huge influx of new residents during Covid.

While the affordability crisis isn’t new, it has ballooned over the past year as people returned to big cities and some housing-scarce areas saw a boom in new residents.

Adding to that, many would-be homebuyers pulled out of the market after mortgage rates rose this year as a result of the Federal Reserve’s “aggressive interest rate hikes.”

According to the Bloomberg report, rising costs and a shortage of available units are giving landlords the advantage of raising rents across the board. And the end of the federal eviction moratorium, combined with declining rental assistance, has forced people to make tough decisions.

Many renters, who typically spend more of their income on housing than homeowners, are already struggling to keep up with higher bills at the grocery store and gas stations.

Housing costs make up about a third of the closely watched consumer price index, which rose 8.5% in July from a year earlier, according to Labor Department data released Aug. 10.

These are the 10 most popular startups in the world

celebrities who have had a hard time after breakups