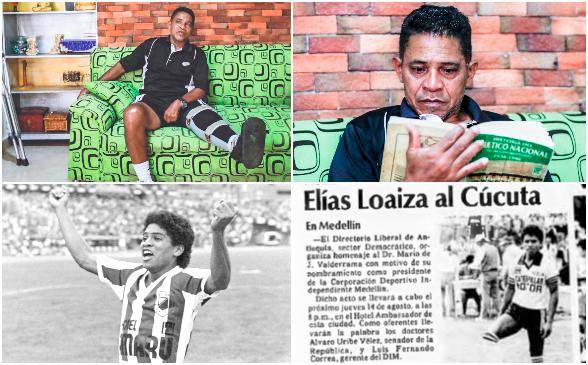 “Elías, put on your guayos. You’re going to debut.” This was what was heard from Gilberto Osorio, coach of Atlético Nacional in 1984. He was looking for a solution to a complicated game in a dark young man, 1.67 meters tall.

It was Sunday, November 11. Atlético Nacional received Tolima in the grass of Atanasio Girardot for the fifth date of the final octagonal. Until the start of the second half the match remained tied 1-1. Elías Loaiza, who grew up all his life in the Belén Rincón neighborhood of Medellín, was ready to enter.

“I was always a fan of Nacional. I had to play with the team of my dreams”, says Loaiza while he remembers that duel in which he wore the “20” shirt of the purslane team.

The replacement was by Gabriel Jaime Castañeda. The stopwatch marked 59′. Three minutes on the field of play were enough for Loaiza to score a goal.

“It is a very beautiful memory. I enter and “Bocha” Santín passes me. He threw the ball over the Tolima defenders, I control it with my left leg and with my right I put it in the entire angle of the goal that Carlos Valencia was defending”, Loaiza recounted with tears in his eyes. His legs, the same ones that gave Atanasio the joy of scoring a goal that afternoon, no longer work.

Since Loaiza’s debut in the temple of Antioquia soccer, 38 years have passed. Sitting on his couch and wearing a brace that prevents any movement in his left leg. This former striker clings to a book that collects all the memories of him with the green paisa.

“He was a very handsome player. A strong, fast and forward-looking right winger, with very good physical condition”, describes him by coach Pedro Sarmiento from Antioquia, who was his partner in Nacional.

“Short, Shorty! You did very well!”, was the comment of Gabriel Gómez and Juan Jairo Galeano when Loaiza scored against the Pijao team. The game had broken loose and Nacional partially won 2-1.

From his home in Belén Rincón, this former purslane player remembers that the greatest joy at that moment was realizing that his father, Mr. Hercilio Loaiza, had witnessed his debut.

“For more honor, I see that my father was behind the stands. I didn’t know, he was unexpected”, she listens to her while he looks at one of the walls of his room. There he keeps a photo of his father and his mother, Doña Lilian Gutiérrez.

“El Petiso” or “Loaizita”, as his colleagues nicknamed him, has always lived in Medellín. He was born 60 years ago into a family of 12 siblings. Football has always been what he likes the most.

“Everyone in my house is very mountaineer. I started my career in the neighborhood. He played on the dirt courts in the little pirate tournaments and the recochitas: they were tremendous pantaneros”, he said. In one of those matches he was seen by a talent scout, Humberto Flórez, who took him to his first team, Invater.

Until 1980 “El Petiso” played for the Antioquia National Team. In the process he crossed paths with players like Luis Fernando “Chonto” Herrera, Jimmy Arango and “Sachi” Escobar. His speed and goalscoring ability made his love team look at him: Nacional acquired his pass, at age 19, for 100,000 pesos at the time. “That was a tremendous bill, a silver. But when that money went to the representative and one did not get anything.

It was 1980 and the man from Belén Rincón was already close to the stars that he heard doing deeds on the radio. “My idol was ‘Chumi’ Castañeda —champion with Nacional in 1976—, I always dreamed of playing alongside him. Fortunately he gave it to me. By then Professor Osvaldo Zubeldía was alive and one day he compared my game with his”.

He was in the lower divisions of Nacional —or the reserves— until 1984. He trained with the professional team because the regulations at the time required that at least two youth squads be on the local rented bench in each match.

One day after the debut of “Petiso” by Belén Rincón, the pages of EL COLOMBIANO described that the previous afternoon at the Atanasio had been sunny, but with a slight breeze. The journalist Alfredo Carreño Suárez was at the stadium and dedicated a few lines to the new professional.

“Another National for the complementary. with more dynamics. Flyers with higher production. Sergio Santín was very loose, but the score did not come. And it was the debutant in professionalism, Elías Loaiza —three minutes after entering the field— and in the first contact with the ball the one in charge of putting Nacional to win 2-1”, commented the journalist Carreño in these same pages 38 years ago. years.

From that game, Loaiza began to play several minutes with the green shirt. Professors Osorio and Juan Martín Mugica (1985) wanted to give him more confidence. But this striker knew that consolidation would be difficult.

“At that time the starters were Sapuca – a Brazilian who scored 41 goals with Nacional – and Hernán Darío ‘El Arriero’ Herrera”, he recalls while affirming, with a laugh, that “the problem was that they would get injured” because that was the only way he could play. a few minutes. Loaiza began to look for opportunities in other dressing rooms.

That Sunday he had been on the Atanasio field for 23 minutes and witnessed the sensation of a silenced stadium. In the 82nd minute, Tolima went on the attack and scored a free kick near the area. The person in charge of collecting was Eusebio Jacinto Roldán, the Argentine midfielder scored for the 2-2 draw of Deportes Tolima.

Given the few chances of playing in the team of his loves, Loaiza allowed himself to be seduced by offers that came to him from other places. On August 7, 1986, the pages of this same medium reported that “El Petiso” already had everything ready to join his new club: Cúcuta Deportivo.

“I told the manager and the coach that if I couldn’t play, they would do their best to loan me out elsewhere. Cúcuta had already made the request and we had a verbal contract. But that Saturday I couldn’t even catch the flight, I went straight to a hospital.

The last thing that “El Petiso” remembers is that the night before the trip to Norte de Santander he had an invitation to a 15-year-old party in his neighborhood. He lent him a motorcycle. As he was driving to the social event he saw a van going down at high speed. They ran him over.

“I was in a coma for 15 days, when I woke up I was on a stretcher at the CES Clinic. My family talked to me because I couldn’t, I had a fractured jaw. My diet for two years was through a cigarette.

Elías also lost part of the mobility in his left arm and the impact began to cause problems in his legs. The medical recommendation was only one: the footballer could not kick the ball again.

“I told my family to throw away all my things: the guayos, t-shirts… But my mom told me to stop being stupid because I was going to get ahead,” he breathes, apologizes for his tears and continues: “Mother is mother and I will always be grateful for that unconditional support.”

In 1989 Loaiza returned to training with Nacional —the squad that became continental champion—. Professors Maturana and “El Bolillo” Gómez opened the doors for this striker to get in shape. In those he became friends with Andrés Escobar.

“We were playing a little game, one of my teammates made a pass to me and Andrés, who didn’t give up the ball, went straight to me and hit me tremendously off the ground. They all got scared because I was playing with a sling on my arm and they thought I had hurt myself. But nothing happened: there were more laughs. Andrés was the first to help me up”.

Duel you don’t want to lose

“Loaizita” had to definitely get away from the ball. In his desire, perhaps, to be close to the king of sports, he began to work as a builder of synthetic courts. The heat of that grass affected his knee and he had to resign.

In the last four years, this former striker has had 9 surgeries to try to get a knee implant. But that medical effort has not given results: his body rejects them.

“Don Elías is diagnosed with knee osteoarthritis. This, surely, is a consequence of his evolutionary wear and tear, ”explains the orthopedist Diego Guzmán, the former striker’s doctor.

Sitting on his sofa, with a device that took away all his mobility, Loaiza again remembers that duel against Tolima. There were two minutes to go “and Tigre Víctor Hugo del Río gave us three laps. On a counterattack he defined the game 2-3 for the visit”.

“El Petiso” wants to attend therapy and seeks help to do so. The day of his debut he fell, but this, the game for his health, he wants to play for as many years as necessary

Cruella Von der Leyen and the oil of Palpoutine… to die of laughter!